Many years ago I enjoyed Ann Patchett’s Bel Canto,  but later I thought her book State of Wonder was kind of lame, so I avoided Commonwealth in its year of hype and I’ve not read anything else by her.     However,  in honor of an upcoming reading group discussion –  I read it and it’s really quite a good book after you get into it. 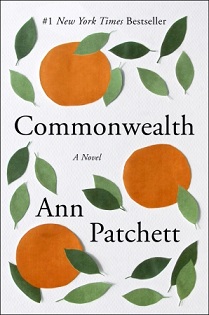 There are a lot of characters to keep track of so thank goodness Hope Davis does a nice job of reading the book – smoothish voice and not too emotive nor flat and with good distinguishing between the many voices as appropriate.

The book opens with a longish chapter in which a huge party is going on.  It’s  in honor of a christening (Franny’s) where  Bert Cousins, who is married with children,  kisses Bev Keating (the mother of the baptismal child) and starts the whole tale rolling.   This is in California of the late 1960s and the fruity drinks flow like water.   This chapter with many characters is confusing,  but the main plot line is set up.

From there the narrative skips to Virginia in the 1970s  where Bert and Bev are now living and married to each other.   Over the years,  the children are shuttled back and forth between Virginia and California.  Bev’s children live with the couple for most of the year but  Bert’s four children live most of the time with Teresa,  their single mother in California,

During those summer months in Virginia the children are left pretty much to their own devices because Bev can’t cope very well and Bert is overloaded with work.  Even their absent parents have their own serious problems and are non-attentive.  The children basically only have each other.

And that’s what the story is about –  how these six children navigate the next 50 or so years,  staying in touch,  continuing some semblance of family but without any kind of focal point.

Franny and Caroline Keating along with   Cal,  Albie,  Jeanette and Franny Cousins are very different,  they don’t even look like each other – are bored without anyone to guide some kind of activities.

The big kids Cal, Caroline and Holly generally ignore the little ones,  Jeanette, Franny and Albie and they play dangerous games with adult toys.  The parents nap a lot.   The kids are angry and do forbidden things and it’s like this every summer for years.

In the next section we find  Franny, an English major and law school dropout with lots of debt,  working at a bar, a job she hates but it pays the rent.    One night a famous author comes in and she waits on him,  they flirt.  She was born a year prior to her christening in Chapter 1 in the late 1960s so this is probably the mid-1990s.

And so goes the book – in and out of time and place and characters as the children grow up from this mess into their own messes.

There’s a lot of drinking in the book –  Chapter 1, late 1960s,  is a drunken party where the kiss starts things.    In Chapter 2,  probably the late 1970s,  the kids take whiskey and a gun to the beach and even the baby gets his share of the booze –  quite good – convinced me to continue.  In Chapter 3,  Franny serves a famous author a lot of drinks and she accompanies him to his room and then to Iowa.   This is truly boring except for a backstory about her life as a child (1980s?)  in competition with Caroline.   This is about 1/3 of the book

Jeanette, in Brooklyn,  becomes the wife of a Guinean man and mother of his child.  Then after many years her younger brother Albie shows up out of the blue and we get further flashbacks to his younger life.  This is riveting – Albie has had problems in his past and is now a drunk who uses drugs.  Jeanette has her own issues.  This is probably in the same time frame as Franny’s section.

And it’s Albie who first reads the book  – the book which the author-friend of Franny writes on the basis of the tales she tells him when her stay goes on for months and then years.   And the book becomes a best-seller as well as a contender for the Pulitzer Prize.

So we switch over to Franny and her life at the beach where she is staying with her author.  She’s 29 years old,  so it  must be ’98 or ’99,  and she’s expected to play hostess to a bunch of 60+  year old drunks  –  her author-lover is divorced,  remarried and now separated. – would likely marry Franny if he could but …    Big problemo – Franny doesn’t drink.   –  yup.   This is possibly because of a serious deed she did in her childhood. Franny is in touch with her mother in California.

Although I listened only and the book switches between time frames and people,  I never got mixed up.

Bert marries Bev and the kids all visit in the summers –  (that’s the troubles)
Bev keeps her own kids –   Teresa has hers for most of the year but sends Albie at age 15.

4 Responses to Commonwealth ~ by Ann Patchett