Libertarians on the Prairie – by Christine Woodside

Having read Prairie Fires by Caroline Fraser just three months ago, I wasn’t all that keen about finding Libertarians on the Prairie on sale at Amazon.   That said,  I did wonder what the differences in the two books would be and I couldn’t imagine this one being better but …  this is a good book.  It’s a bit less general than Frasier’s and with a somewhat more scholarly approach toward the political element in Rose’s contributions to her mother’s oeuvre.

Prairie Fires covers the life of Rose Wilder Lane (Laura’s daughter) and her involvement in the work of her mother,  Laura Ingalls Wilder.  It also covers Rose’s  politics  – Rose is called one of the “founders of libertarianism.”   The book is really a dual biography as is this one.   The basic material itself is essentially the same,  but where Rose comes across in the Fraser biography as a somewhat spoiled child with limited contributions to the Little House books, she’s almost the heroine of Woodside’s book – there’s much more about her than there is about Laura.  Laura is a more of a bumpkin. 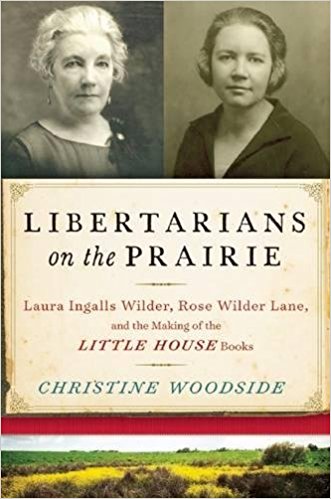 I suppose the truth is somewhere in between but we’ll never really know.

This is a good book.  I accept that Laura Ingalls Wilder would have been nothing without Rose’s guidance,  but I also understand that there would never have been a series of Little House books without Laura –  no matter how great a writer Rose was.

Libertarians on the Prairie is only 292 pages including Notes and appendices.   The Frasier book is 640 pages and the difference is apparent – there’s simply a lot less information  –  and where the Frasier book is geared toward the interested layperson,   Woodward’s version is more scholarly – almost assumes the reader has a basic knowledge of Laura’s life and works.

Also,  the Woodward book is very much oriented toward Rose and her life rather than Laura’s and shows Rose’s progression into Libertarianism.   This book does not mention the  lawsuits regarding her “interpretations” in her unauthorized biographies of Jack London (for which she was sued),  Herbert Hoover,  Henry Ford, Charlie Chaplin and  others.  This book shows Laura as being much more of a story-teller than a writer- not much taking her strong will into consideration.

Prairie Fires has quite a lot about Rose’s leaning toward Libertarianism,  but in Woodside’s book the details are made more clear – of course, here the focus is that exact thing as named in the subtitle.

Rose’s book,  The Discovery of History has a typical conservative outlook and  Woodside uses the hugely laudatory comments of David Beito’s (Uni of Alabama) about it.   Beito is a current day libertarian/ conservative who is too young to have known Laura.  The comments of the New York reviews at the time,  which were not at all complimentary,  are ignored other than saying they existed.  She had to plead for positive comments from Hoover and eventually wrote her own (which he simply passed on).

The whole thing boils down to the idea of who wrote The House books.  It would seem that Laura wrote the basic stories,  but needed Rose’s assistance to put them into publishable format.  How much Rose actually did for the books is the question.   The two women never told and  the thing is I’m not sure even they knew –  no one really knew except possibly Rose and she never told anyone – not even Laura.  I personally don’t think she did a lot more than a really good knowledgeable personal editor would do.   (Look at Benjamin Lay and his editor/publisher Benjamin Franklin.)  She did more as the series and her own political views progressed and Woodward shows it.

Woodward provides specific examples of how Rose did influence Laura’s books and where she apparently didn’t.   Laura was quite a strong-willed woman herself.  Frasier’s book doesn’t get that detailed about this aspect,  but just goes through the books as they were published – it feels like reading The Little House books again.    It seems that when  Laura wrote,  she avoided specifics about hard times or things which weren’t true to her memory or sometimes because they were too intense for children.   Rose wanted to put some of those parts in – Rose became more and more political.

As to the idea that Laura was as “libertarian” as Rose it’s an odd one because although Laura had a problem with taxes,   that was probably the extent of her political thinking.  Rose took it from there to fighting government in almost all areas and her estate supported the Koch family as well as Rand Paul –  no foreign involvement,  end Social Security –  it seems almost anarchistic.

2 Responses to Libertarians on the Prairie – by Christine Woodside