She Rides Shotgun ~ by Jordan Harper

I was attracted to this one because it has a nifty title and it’s a nominee for the  Barry Awards First Novel Award – 2018,  so it showed up on the 4-Mystery Addicts list.  It looked appealing from the title and the brief summary,  and the sample sounded very promising so I just got it and started the same day I saw the mention – what the heck? 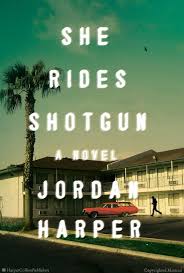 The extraordinarily bright and imaginative 11-year old Polly McClusky  lives with her mother and step-father somewhere in the LA area.  Although she goes to school,  she has no friends.  She doesn’t do her homework so she can even avoid recess.    She carries a teddy-bear and is quite talented at using it as a puppet.    Her father,  Nate McClusky,  has been in jail for quite awhile.

One day her father comes to pick her up from school –  he’s been paroled.   But the twist is he killed a man the day before his actual release and now payback is a bitch because the man he killed has top-notch connections and a bad-ass brother.  He wants Nate’s family killed in retaliation.   So by the time Nate picks up Polly,  her mother and stepfather are already dead – and not by Nate’s hand. At this point Nate has to try to save  Polly from being killed next,  so the book is a lot of page-turning action.

Nate has to get the two of them away,  train Polly in gangster fighting and robbery,  and line up friends to help.   Pretty soon everyone is after the duo – even the cops,  good, bad and ugly.  So off Nate and Polly go to the desert east of LA where the drugs and gangs rule in Slab City – home of Aryan Steel gang,   a white-supremecist prison based group of outlaws.   They have one friend,  a woman who runs a small store.

Polly takes to this life – she’s her father’s daughter through and through.   Besides,  she’s    still angry and mourning her mother and loves her father dearly.   She uses the bear to great effect in many ways.   Everything works –  but it gets gritty.

There are parts of this book which are almost literary – the dialogue is probably spot on -but the sentences are like short pointed things,  sharpened like knives.  And there are the original and appropriate metaphors and tropes,  beautiful and re-readable.  Also,  the structure of alternating points of view is well done and definitely used to best effect with very little,  if any,  foreshadowing or other sometimes “cheap tricks,”  although there are a couple of cliff-hanger chapter endings.

In addition,  the themes of loyalty and several different kinds of love and the growth of a young girl’s self-respect – a kind of coming-of-age story if you will –  all point toward literary.

Okay,  even if the overarching and deep-rooted base of this novel is the suspense and thriller aspect and  everything works toward enhancing that – it’s a literary thriller – and maybe it will win the Berry Award.

2 Responses to She Rides Shotgun ~ by Jordan Harper