The Widow by Fiona Barton

Posted on April 6, 2017 by beckylindroos

I’m still on a crime roll.  I almost ended it last night with the purchase of some nonfiction (history of Christianity),  but had been tempted by this debut novel by Fiona Barton for some time.   (sigh)   It’s getting to the point where I’m getting a bit weary of crime novels – so many seem similar and they feel grittier.   Maybe I’m getting pickier – or – I’m hitting less worthy books – or – I’m just getting full of it.    Yes,  each book is a bit different in some way or another,  but building tension seems to be the common denominator. These are not the gore-free  “who done it” puzzles of Agatha Christie at all.  These newer books seem to focus on how deviant the bad guys can be and/or how nail-biting a chase scene can be.  In this case the bad guy is seriously ugly,  but fortunately there are no graphic scenes.   Also, there are no chase scenes.   It’s straightforward suspense created out of “did he or didn’t he?”  and “what did she know?” and using journalism,  police work and courtroom scenes plus the memory of a woman brought out by a skilled journalist. 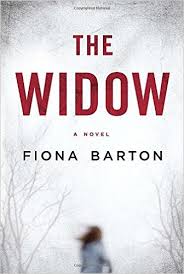 More and more crime novels have crossed sub-genres.   And what we have is suspense/ procedural/ legal mixed up with a woman whose memories are not always reliable.

And it’s compelling also because it has an interesting structure with this  journalist person interviewing the newly widowed Jean Taylor whose husband died only a few weeks prior.  This is in 2010.  The trouble is,  and we know this from very early on,  her husband,  Glen Taylor,  was suspected of having abducted and probably killed a small girl back in 2007.   So the media is fascinated and Kate Waters is on the scene making the most of that.

The narrative goes back to pick up on the events of 2007 and 2008 as Jean reflects on her life and marriage to Glen Taylor.  Glen died suddenly when he was hit by a bus only a few days prior to the interview.

Alternating with those chapters on Jean’s memories is the same case of the child kidnapper from the point of view of Detective Bob Sparks and his team’s involvement in from getting an alert that a child is missing,  through procedurals and courtroom dramas to the very ending,  about 3 1/2  years.

Jean Taylor, the widow of the title,  is a curious and well developed but reticent character – her husband, the “pervert” as the media calls him,  is creepy,  Bob the cop is a good cop in general and the newspaper reporter is good in general – but we all make mistakes.