My Sister’s Grave by Robert Dugoni

Posted on April 3, 2017 by beckylindroos

I’m taking a break from reading the hard stuff and going with whatever comes my way for fun.  Crime novels are good.  Legal thrillers are better.  This is a new-to-me author and I’m generally pleased if not wow’ed. –  mostly procedural but there are a couple of good courtroom scenes. 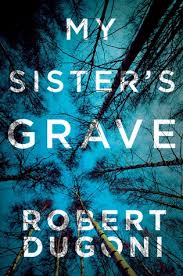 Twenty years prior to the main action Tracy Crosswhite’s sister was brutally raped and murdered.  At least that’s what everyone thought –  no body was ever found.  A local bad guy was tried and convicted though – conveniently and using somewhat less than well examined evidence.

Now the body has been found and Tracy, who is currently employed as a homicide detective across the state in Seattle,  is on the scene for it.  She’s not convinced that the man in prison is guilty of this particular crime – she’s very suspicious of the evidence – or lack of it – and she wants to know what really happened to Sarah.

So she hires an old friend who is now a local attorney (and divorced …  sigh) and together they try to find the truth.    The truth is that this is a sleep-stealer and I was up way too late even knowing I wouldn’t be able to finish.

There’s one huge error in the book – provided they’re charged cell phones work just fine without electricity.  It’s one of the benefits.  This is a serious irritation in the book.

Other than that,  it’s well enough written for a crime novel (police procedural – legal – thriller) with an undistinguished cast of characters and a kind of lack-luster plot line up to the ending – which is definitely interesting.   The best parts,  for me anyway,  are the courtroom scenes.  There’s a certain amount of who-done-it in almost every legal crime book.

The back-story of Tracy and her sister is inserted at intervals and slowly catches up with the frame story.  These portions are in italics so it’s a good thing I got the Kindle book because the switch between past and present would have thrown me.