The Flamethrowers by Rachel Kushner x2

Second reading here – another reading group selected it and when I read it over two years ago I loved it so much – (I gave it a 10)   see my prior reviews and notes.

I was crossing my fingers but I had problems –  I’ve said before I’d almost rather not reread a book I’ve given a 1o on the first reading (and I’ve quit doing that).  This is a 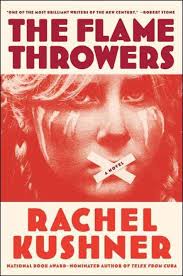 perfect example of why.  It just doesn’t hold up for the long run.   Other books have held up and their ratings have also gone from being 9s to 10s on the second reading.

I definitely prefer that.  Still – I can’t even give this a 9 on this reading.First,  what the heck was Reno doing out at that race track by herself?  Has the girl no sense?  –  Yes, it’s about taking risks.   It was risky for Kushner to write this with such male-oriented subjects,  like racing motorcycles on the desert,  and it’s over-written in places – (I wasn’t so blinded by the book’s feminist themes and the DeLillo resonance this time round).

So this time I was wondering what I saw in it last time, and what I missed!   What in the world is this girl named Reno doing out racing motorcycles on the desert alone?  Nonsense. Almost as stupid as Cheryl Strayed in Wild.

I get the idea of risk here – especially taking risks for your art.  And a bit later I got the idea that women have a special sense of anonymity or loss of identity.  And then there’s the speed and the engines and violence of speed as well as being out of one’s element,  a westerner artist and motorcyclist  in New York, an American in Italy during a violent labor uprising,  a rich Italian in a bad neighborhood of New York.   A poor American artist involved with a rich Italian playboy and his family.  Transiency and speeding through life.  Games.

What’s with the Valera character in 1940s?  –  He adds texture but the inclusion of these sections feels clunky.

“I was the girl on layaway.  And it wasn’t Ronnie who’d put me on
layaway.  It was something I’d done to myself.”

There are a few women in Reno’s life, Nadine,  Giddle and Gloria in the beginning and and again toward the end.   They’re presented as being interchangeable in the films and jobs,  women are objects for work,  amusement,  decoration, service –  or as holders of the family fortune,  carriers of genes.   But it’s all performance – they have roles to play and so they wear costumes, go on stage (into bars or living rooms) and do the thing of the costume –  waitress,  mistress,  China girl,  whatever – remove your soul, your identity.  Some of the Italian women of a section in the middle seem more “authentic”  although most of them were really unlikeable.

The book is over-written with too many lushy metaphors and heavy handed satire,  like Kushner is really trying too hard.  And trying to hard to write “like a man.”  (Huh?)  By which I mean it’s engines and sex and speed and risk along with some art and love and problems with identity     –   women,  they’re “trapped in time” and men “move at a different velocity.”  –   Kushner is trying to break free.    Trying too hard.  Like Reno and Giddle.  But it’s fast – for a novel,  it is very fast.

Although Kushner overdoes it  sometimes,  she can certainly write well with even the details detailed.   Favorite lines –  Reno had cut the head off a whole fish served at a restaurant.  “It sat on my plate like a shorn airplane fuselage.”

Maybe my dissatisfaction with the novel was a problem with the narrator – she read slowly and it sounded like a nostalgia piece –  definite disassociation but nowhere near the speed indicated by the theme.   – It’s amazing Kushner’s printed narrative,  intense with metaphor and description,  is not slowed by this.