If you enjoy good science fiction –   YES!!! –  But this astonishing book is the third in the Remembrance of Earth’s Past trilogy by Cixin Liu,  a contemporary Chinese writer.  The first book is called The Three Body Problem (2014 in English) and the trilogy is usually known by that.  The second book is The Dark Forest (2015 in English).  Both of these are very, very good sci-fi in themselves,  but the third book,  Death’s End,  is the mind-blower.  They really MUST be read in order, though. 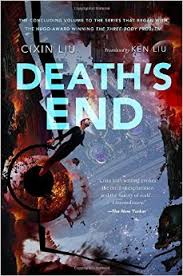 Death’s End begins at some point in some place,  but it’s specifically stated that there is no past or future so … the narrator is watching a sunset ruminating on the how it came to this.

Then Part 1 starts out in 1453 CE and the collapse of Constantinople to the Ottomans.  Mortars  balls are used for the first time.https://en.wikipedia.org/wiki/1453 and a “miracle” occurs.

I can’t possibly review this book much less the trilogy – it’s gigantic in scope and depth.  Actually,  each of three books is epic in scope.   The Three Body Problem  is mostly set in the near future with some backstory and focuses on physics and early communications with an unfriendly  alien force.  The Dark Forest is set a couple hundred years in the future and focuses on several attempts to avoid warfare with them -the focus is on socio-economic effects on Earth.   Death’s End is set in a further future  and is concerned with how it all ends.   Yes, there is some intergalactic warfare,  but there is far more humanity involved in this one.

After a couple of intense prologue type stories,   the overarching plot  of Death’s End  really gets started with a rocket scientist named Cheng Xin and her hibernation in order to reach future times.  During the course of the book she is  awakened repeatedly over the centuries.  During this time there are space wars and earth-bound readiness and escape plans.

One of my favorite parts is near the center where a character tells a series of “stories” which are very fantastical / myth-like,  but which could be interpreted as prophesy and metaphors within metaphors –

I just can’t go further because it’s very  complex, interwoven and science oriented.  One of the criticisms of the prior works has been that there was too much science lecture type narrative.  That’s true here too but it never bothered me – it was fascinating even if I didn’t follow it all.

One of the things which sets Death’s End apart is the faster pace and deeper exploration of humankind,  individually and as a group.