Posted on December 19, 2015 by beckylindroos 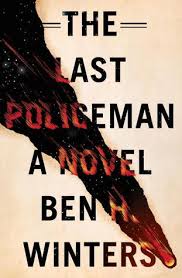 Interesting book – it takes place in the current times,  but the world has just been informed it has about 9 month to exist.  This is because an astroid is zooming through space right on target to hit.

Detective Hank Palace has chosen to keep working as a policeman in a New Hampshire city in spite of the fact many people are either committing suicide or quitting jobs to do something on their “bucket list.”  Being a police detective is what he wants to do so that’s what he does. And there are others on the police force who stick around.

The case Palace is interested in involves what appears to be a suicide by hanging in a McDonald’s bathroom,  but Palace thinks it was murder.   He follows up on leads but is lied to repeatedly.  There are several factors,  drugs,  computer projects of the astroid, insurance fraud, more murders.  It’s pretty good mostly because of the setting – the sense of impending doom.  >>>>MORE  (no spoilers) >>>>