Posted on November 12, 2018 by beckylindroos

What a waste of time and paper! Why? First, Cozzens never uses a lone, single word when a whole convoluted paragraph full of them can be had. This book is as dense as the London fog near the coal burning plant in 1952 which actually created a killer smog. And that’s a word which suits the narrative nicely – a smog of words which close to killed my interest.

Second, Cozzen’s apparent attitude toward women, Catholics,  Jews,  Blacks and other minorities, is abominable to my 21st century sensibilities and abhorrent to most folks in this day and age.  I’m sure some of the ideas were totally acceptable in the 1950s, many were social  assumptions. Because the book was billed as being very realistic,  I suspect the depiction of small town American values is accurate.  I was in my childhood so yes,  I was kind of raised with a lot of this,  although I never heard anything bad about Jews or Blacks.  My grandmother hated the Catholics and everyone I knew expected women to know and accept their place.  We were raised to be good and virtuous wives and mothers. Period. 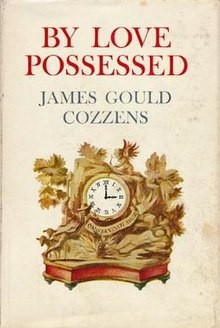 So why did I continue reading? I don’t know all the reasons.  There were at least a couple of fairly interesting plot threads going and I was curious as to how they would come out.  And the major (male) characters were pretty nicely developed and likable.  But had it not been a reading group selection I would never have picked it up (it’s been long out of print) much less finished it.  As it was, I saw the book as a bit of a challenge.  And I finished.

In the service of some mid-20th century realism,  Cozzens has created a 570-page tedium of details piled one atop the other, apparently trying to get at the exact nature of the honorable WASP (White Anglo-Saxon Protestant) male experience during a two+ day period in the life of a character named Arthur Winner.  Henry James was a master of this type of thing,  but Cozzens is no James at all – in any way.   Cozzens seems to have been trying out the style on the mid-20th century scene in  the US and maybe it worked in 1957,  but in 2018 it’s truly cumbersome and almost unreadable.

The main plots themselves evolve over a 2-day period, with flashbacks covering Arthur’s whole life. Those backstories end at about half-way through and we get philosophy-like treatises on religion and life or legal issues which pad the plot lines.

The point most of the rave reviews made at the time was that the book upholds traditional establishment values when they seemed to be being attacked.  These were values like honesty, virtue, Protestantism, marriage and children with hard-working well-educated guys from the right families working hard and creating wealth.  Women were needed for sex, babies and homemaking,  but in general they needed to be directed and cared for.  Sex was for the marriage bed only and women who looked like they were interested in that at all were thusly judged.  Homosexuality was almost unheard of and beyond scandalous. It was vile and the work of the devil.  Blacks also were fine –  if they “knew their place.”   Meanwhile, well-educated, white, Protestant males, especially successful bankers, lawyers and the clergy,  were generally (!) caring souls with the best interests of their clients and families at heart, although there might be a rascal in the bunch,  maybe a politician or a Catholic. Catholics and Jews were simply “other” and therefore suspicious.

Those were the values but sometimes the fine, upstanding males slipped up in some minor way.  That’s the basis of most of the plot threads. So the main males cover for each other as necessary, by simply keeping quiet.

The main theme of the novel concerns accidental or misguided actions on the part of good people which results in harm to others, or may result in harm to others in the future, or are simply immoral for some reason.  A young man is enticed into having very inappropriate sex;  in the distant past, a much older man, now losing memory, helped his unlucky friends by embezzling from the account of a widowed mother and friend who now needs the money;  a rather dizzy woman considers converting from Catholicism; and the problems of the effeminate bell ringer at the church. Arthur Winner, our wise hero with a married woman issue from his own past, advises them all.

All that said, By Love Possessed was a huge best-seller and garnered widespread acclaim.  It’s a classic now and I can only view it as such, a bird’s-eye view into the times of the 1950s, small-town USA.

I read the following review after I wrote my own and was pleased to find a scathing critique validating my own views (even down to Henry James).  At the time this review set off quite a controversy.  https://www.commentarymagazine.com/articles/by-cozzens-possesseda-review-of-reviews/