Posted on November 11, 2018 by beckylindroos

I read this about a month ago but  I very much enjoyed it and in order to remember it well enough to participate in a discussion I decided to reread it.    Yes,  it was definitely worth it because where I kind of glossed over the animal behavior parts the first time,  this time it became a focus. I’m not surprised because my usual interests are more oriented toward law, government and policy analysis but animal behavior is fascinating. 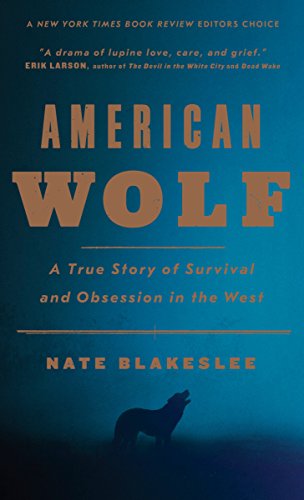 That said,  I won’t raise my rating because it was generous last time and this time it’s very close to right on.

Blakeslee is obviously a pro-wolfer but he tries to keep that to himself as he gets some basic information from the man he calls Steven Turnbull.  I think this helps overcome the fact that he and  his sources humanize the wolves in so many ways throughout the book. There are few “lone wolves” in the book and those are sad, lost creatures.  Rather for the most part, the wolves live in packs which are described as families. They are empathetic creatures and their watchers truly love them.  And the reader gets caught up in those descriptions and actions as she reads.

I did have a small problem with the amount of violence the wolves do to the elk and other prey with the watchers rooting them on admiring. But man is a predator too., Perhaps Turnbull is a bit more honest.

I’d like to be a 100% wolf lover but there’s a part of me that says wait a minute, those rancher families have been there, free of wolves, for over 100 years.  Now the forest service decides it wants the wolves back.  Is threatening the livelihoods of honest and hard working people a great idea?   I hope some viable compromise can be worked out.