One Perfect Lie ~ by Lisa Scottoline

A couple decades ago a good teacher friend recommended Lisa Scottoline so I read one and wasn’t too impressed but I wasn’t reading crime novels at the time – I think I read one of her Rosatta novels.  One Perfect Lie is a standalone,  a moderately new release (2017) and it was on sale –  okay fine – I needed a break from the political stuff –  I was a bit bored –

It opens as such a mellow book – nice – and after 3 1/2 hours of pleasantly getting acquainted with the characters and their situations – some tension there  –   this reader was sucked into the idea that it was different from what the blurbs said.

Oops!   Because then came the shocker – What the heck is going on?   Yikes! 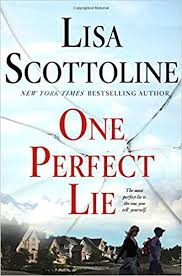 I’m not going to spoil it by going further but there is a murder and a few other crimes involved as well as a bunch of nicely developed and interwoven characters.  The book very slowly works through some twists and turns with the mystery related to how  he victim died and then jacks up the tension to fairly intense and bursts into thriller mode. It seems like everyone involved is up to something but … this?  A fun ride –

It’s more of a procedural with lots of family drama including the tiniest touch of romance.   I’ll keep an eye on Scottoline,  but not necessarily pick up on everything I see.