I was really wanting something good to read and there seemed like so many to choose from until I got to actually picking one –  then I stalled.   Oh dear –   I wanted some good juicy nonfiction book –  not crime,  not politics,   what??? –

Aha!   I’d just recently added a new release to my wish list – kind of true crime,  in a quirky kind of way –  The Feather Thief  by Kirk Wallace Johnson.   The story of a young man who broke into a museum of natural history and stole a bunch,  a big bunch,  of stuffed birds.   Yeah?  Hmmmm….  got good reviews.  I gave it a try and I’m glad I did. 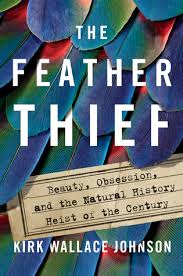 Edwin Rist, the thief,  wanted exotic birds with eye-catching, iridescent plumage.  He wanted to create flies but he needed materials which were expensive.   While in London on a visit from  the US,  he visited and then broke into the British Natural History Museum at Tring.   He took as many specialty birds  as his small suitcase and backpack would bear.  He went home and proceeded to sell the feathers and skins in the right places,  but fairly quickly,  the police caught up with him.   So then comes the trial and the aftermath.

Johnson goes through  all this with some energy and interest but the good stuff happens after the deal is done.   Trying to get all those specimens back was quite another problem..   At each level the reader thinks this must be the end of the story but … no… it goes on and it gets better.   Happy reading.   🙂

2 Responses to The Feather Thief: ~ by Kirk Wallace Johnson