I read this for the 4-Mystery Addicts group- but I had had my eye on it before that –  I might even have nominated it –  ?   Anyway,   it was very disappointing.   In my defense I enjoyed The Heavens May Fall and The Life We Bury –  (links to my reviews),  his prior books,   but this is different, grittier, although it’s the same series with homicide detective Max Rupert as the protagonist. I think the narrator might have a lot to do with my feelings –   Eskens uses different narrators

But Max has changed in some way – he’s cold and brutal and insists on everyone doing things his way because he knows he’s right – especially when it comes to crooked cops and politicos  and vengeance for his wife’s death.  And he even winds up dealing with a Russian mafia type group.   Yup, – pretty formulaic.   Maybe that’s the narrator,  too –   “Just the facts, ma’am,”  and, “We’re doing this my way.” 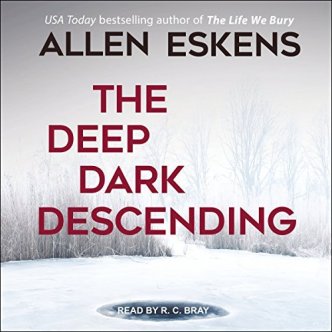 I was just so tempted to drop it –  quit – but there was actually something about the plot which kept me going.  And the structure is interesting with Max holding his prime suspect captive in the chapters which take place in the present time,   meanwhile unfolding the events that brought him to this point in the alternating chapters.   The present events include Max digging holes in a lake on the Minnesota-Canadian border –  he’s going to dispose of someone who is still alive and trying to talk his way out of this.  The other chapters are set in Minneapolis.

Four years ago Max Rupert’s wife was killed in a hit-and-run accident and at the time it was thought to be bad luck and  the driver was never found.  Max, who was not allowed to be a part of the investigation,   could never accept that determination so he sneaks files and then sees that it might actually have been a deliberate killing.

At first Max thinks some of his own activities spread vengeance  to her so his determination to get revenge is very personal.   But no,  she’d found something on her own to put her in harms way.   This is the story of how Max obsessively pursues the killers of his wife and gets entangled in other dangerous matters.   –