For those who don’t know –  Gucci Mane (Radric Delantic Davis) is a famous rap artist who writes some very interesting (and sexist,  violent an drug oriented) lyrics.  I’d never heard of him before,  but the blurbs and sample sounded quite interesting (I enjoy memoirs) and besides,  it had good reviews and was on a great sale.

Mane wrote the book while he was in federal prison for a final charge of being a felon with in possession of a guy.   The felon part was due to a variety of prior charges including drugs, guns and more probation violations.

I recommend it if you’re interested in the music business but otherwise it can get somewhat boring with his complex relationships with other Atlanta and wider based musicians as well as law enforcement.   The best parts are the first and last sections.

The first part about his family in Alabama and Atlanta until he was in about age fourteen is great.  His mother had worked with him at home and that helped him to succeed in school which led to his starting to write poetry and then rap music.   The lyrics run to gratuitous drugs, violence and the debasement  of women – the kind of thing several celebrities have spoken out about.   (Google it.)

But he got involved in drug sales for the money (becoming

addicted later) and that led to other things,  but meanwhile he parlayed his music into a career so those two businesses became his life.  That’s when the book gets a bit boring because there are so many names and music connections along with criminal activities it gets a bit too confusing to bother paying attention.

Gucci Mane is a con artist and a self-promoter – it still shows.  He’s cleaned up some and that’s part of this story (that’s the part which interested me) but there’s still a lot of ego in the narrative – he’s so impressed with himself –  (at least the way that Lockhard reads it).

Finally,  in Chapter 18 (out of 25) Gucci starts getting into the ultimate downfall suggested in the Prologue.  It’s compelling here – there’s a note of honest self-examination – but not much – but it builds to a pretty fair ending where Gucci seems to have lost some of his arrogant and reckless ways,  gained a bit of humility. I hope he makes it.  He was released a couple years ago and he’s done well so far.

The writing is okay,  it is noted that it was written with the assistance of Neil Martinez-Belkinand, a rap rock magazine editor,  and  Guy Lockhard reads it like Gucci is talking right to his audience. 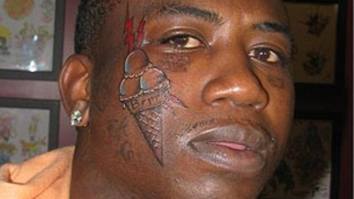