The Red-Haired Woman ~ by Orhan Pamuk

Oh I do so love the way Pamuk writes –  I just get sucked into his books because it seems there’s always an underlying  meaning to the words which comes together in layer after layer along with the complexities of the plots.   It takes thinking for me to read something by Pamuk.

The Red-Haired Woman reminds me a bit of Pamuk’s earlier tales,  Snow especially perhaps.  There’s a mystical,  mythical quality even if the story takes place in the contemporary world.  And they’re often about Turkey (with Pamuk’s beloved Istanbul) and the clash between East and West along with old and new and other issues.

This is probably a minor work from a Nobel Award winner.   His best,  imo, is My Name is Red which I read long ago and I’ve read most of his other novels.  I’m only missing the novels Silent House and A Strangeness in My Mind which I WILL get to.    I’ve also read the nonfiction Istanbul: Memories and the City.

So in The Red-Haired Woman we have a 16-year old boy,  Cem Celik,  who was abandoned by his father at a fairly young age. When he got to high school he was apprenticed for a summer to a professional well-digger.  This is not at all what Cem is suited for,  but it pays well and Cem is a good kid,  saving for college.  He wants to be a writer,  but eventually becomes an engineer (revealed at the outset and pertinent to the story). His boss, Master Mahmut,  an unmarried middle-aged man,  takes the place of a father in many ways.

The book is divided into three Parts – the first of which sets up the whole rest of the book – his well-digging teenage summer when he met a red-haired woman and got involved with some very old myths.  In Part 2 Cem is a middle-age man dealing with life as he’s lived it but plagued by the ideas of father-son relationships – due in part to the conse-quences of that long-ago summer.  To reveal any of Part 3 would be a spoiler.

The main theme of this book is right up front there in Part 1  –  father-son relationships – ala Oedipus for the Greeks but Rostam and Suhrah for the Muslim Turks.  –

On a trip to the nearest city our hero sees a young woman with red hair who fascinates him and with whom he becomes obsessed.   Meanwhile, Mahmut is obsessed with finding water.

So the story of Oedipus, which Cem tells his boss one night,  hangs in the background – along with Master Mahmut’s own story of prophesy, or maybe fate. 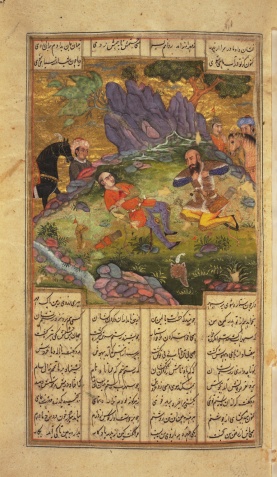 Hopes and dreams and prophesies and stories as well as the related issues of what is real and what is not.

The sensual nature of Pamuk’s descriptions and metaphors in Part 1 are so delicious – they aren’t so apparent in Part 2 probably in part because the desert is gone after 30 years.

I had to look some things up  – either because I had no idea or to refresh my memory: