Paris in the Present Tense ~ by Mark Helprin

Posted on April 9, 2018 by beckylindroos

It’s a windy tale about love in many forms – a love of life and music and family and Paris in the springtime, and the fall and the winter and even in the heat of summer.    Maybe it’s a love letter to laughter, too,  because parts are laugh-out-loud funny.

But beware,  there’s a very deep shadow just on the other side of the sunlight.  The book is by Mark Helprin,  after all.   Does the contrast make the lightness brighter?  Perhaps.  Even in the contrasts of love.

It was recommended in one of my reading groups but  I’ve read and loved a couple of other Helprin’s books,   Winter’s Tale (long ago) and In Sunlight and Shadow far more recently.   It’s hard to describe this book –  it’s sad and slow and twisty,  but at the same time it is hilariously funny,  beautifully written and so full of light and love. 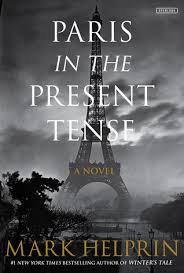 Jules Lacour,  a very healthy and robust 74-year old widower,  returns to Paris from New York and sees a psychiatrist because he feels guilty about the deaths of many people he’s loved,  from his parents in Nazi Germany to soldiers in the Algierian war,  to most recently his wife.  The psychiatrist,  Dunaif, asks him if he’s thought of suicide.  Lacour rejects the idea –  well,  that’s good to know for an opening.

Lacour’s present problem is that his young grandson is terminally ill and Lacour although is a very prominent cello teacher he needs a bunch more money than he has to take the boy somewhere for the best treatment.  So Lacour feels guilty for not having the money,  for wasting his time on music,  composing and teaching cello instead of doing the academic and composing which could have made him much better off.

Meanwhile,  a very fat insurance agent named Armand Marteau also needs money – he’s not been able to sell any insurance lately and he’s stooped to pretending.  He has a family too,  and needs money.

And then there’s Francois Ehrenshtamm,  a philosopher, professor and author,  who is Jules’ very good friend,  But he certainly doesn’t have money because he spends it.    He does, however, steer Jules in the direction of Jack Cheatham, an American executive with a huge and very rich insurance company for whom Jules might write a jingle in exchange for a million Euros or so.

This is not to to neglect the characters Élodi,  Duvalier, Arnaud, Rich Panda or a few others who are either fully and individually developed or delightful caricatures.  They all contribute to the whole.

Back to Lacour –  another problem is that he loves women and falls in love on a regular basis.  He never broke his marriage vows, but now that he’s a widower …  at age 74!…   Oh this is a love letter to Paris and life and death and maybe even a love letter to love itself.  –  Vive la difference – the contrast again.

The main male characters are fleshed out very nicely,  no caricatures here,  except maybe a couple of French policemen.   The women, except for Amina,  are not done so well  but they’re interesting.   The themes of love and family and aging are emphasized but there’s an undercurrent of music woven throughout  –  like this: