Posted on January 8, 2018 by beckylindroos

Oh my –  I really disliked this book and just about every character in it until about 2/3rds of the way through when something actually happens – kind of.   Until then it’s just too meaningless and basically silly,  imo.   It’s about a few days in the life of a huge extended family on a big old plantation of the Mississippi Delta.  There’s going to be a wedding and the women (three generations) are all getting ready for it while at least partially living in the past and basically excluding anyone who is not part of their exclusive circle.  Had this been in the form of a physical book I’d have thrown it against the wall too early. 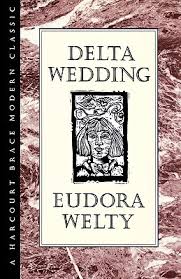 Delta Wedding was published in 1946 with the action taking place just after WWI,  1923.   It’s a little peak into the actual place and times because Welty was born and lived in that area her whole life.  But having been educated in the north,  she had a larger vision and knew America as a whole.   It’s sad and looking backward in mourning or forward in fear and hopelessness.  It’s the story of  suffocation and claustrophobia vs change and freedom.  (And I won’t say which one wins.)

I really enjoyed Welty’s The Optimist’s Daughter which is also about memories and the south and so on,  but nothing like Delta Wedding.

Laura McRaven,  a 9-year old girl whose mother died only 8 or 9 months prior,   travels alone about 100 miles by train to the home of her cousins (her mother’s people)  who live in the Mississippi Delta (map)  The big sprawling Fairchild family lives in a big sprawling house on an old plantation called Shellmound complete with a number of Negro (the term used in the book) servants.

One of the girls, the 17-year old  Dabney,  is getting married which causes a lot of commotion.  She’s marrying the 34-year old Tory who is the plantation overseer.   I suppose the arrangements are done in the complete style of Southern hospitality  – from magnolias to memory and madness with a bit of history thrown in,  and a bit of cooking.  and a bit of violence as an occasional but unmistakable underlying tone.

It is because people are mostly layers of violence and tenderness—wrapped like bulbs, she thought soberly; I don’t know what makes them onions or hyacinths.  (page 53)

And there is the quiet stealth of danger and death everywhere –  from wars to trains on tracks and from the river to serious illness..  The real danger is that something will break the family – there will be loss – and the family has lost so much already.   Fear of change.  And they are all very protective of Maureen,  the handicapped child – damaged – like their “way of life” –  And George can’t save it all – besides he married an outsider which is dangerous enough.  He,  who should have been able to save the family, left them.

As I see it,  the train represents progress and George is going to stand in its path.  The river flows through,  but the kids will go swimming and lose things.  WWI  brought death and disease so they cling even more tightly to each other and the land and their ways.   With a few exceptions,  the oldest generation is stuck in the past,  the middle generation is fighting change as best they can,  and the young ones (Dabney’s generation)  seem to want change  now.

So  family, isolation and the search for identity are huge themes as the family just hunkers down around itself and won’t let anyone in.   Period.   They are terrified of change.  So Troy (Dabney’s fiancé) and Robbie (George’s wife) are definitely outsiders.  The aunts and children are all insiders except  possibly the one who moved away.     Laura is a problem – she’s inside but outside. Her mother is still an insider even if she’s deceased – her body is there in the family cemetery but her father is an outsider who actually stays away.

Laura is not allowed to be in the wedding because she’s in mourning for her mother.  But she’s allowed to travel alone on the train?  This is preposterous. But tradition is tradition and that’s the real danger – they might lose something or someone valuable –  to the river or to the rushing train or to marriage or to death or to just plain losing it. (Mental illness is not considered loss.)

There is no plot – it’s just a family getting ready for a wedding with huge emphasis on the tragedies which have struck in the past and the ever-present threat of more change.   Women have the upper hand because they hold the reins and men are like the horses and could bolt. –

When Welty writes a novel of manners it might be real or it might be satire –  I have no idea.   Are the adults supposed to sound like the kids in all their stupidity?    I might get some input from online sources.

If all those people get confusing,  here’s a family tree:
http://www.alisamuelleck.com/deltawedding/

The Coconut Cake was kind of interesting:
http://www.foodnetwork.com/recipes/ina-garten/coconut-cake-recipe-1947027

And here are some critiques, analyses and reviews (I haven’t read them yet):