The Aspern Papers ~ by Henry James

I really wanted to read this for a long time because it’s so short and I’ve read and very much enjoyed  many other works by James.  It’s very highly regarded and I can see why.

A first person male character is narrating how he and his fellow journalist searched for the papers of Jeffrey Aspern, a fictitious famous American poet of the early 19th century who has been dead many years.   This unnamed protagonist goes to Venice to visit the elderly Miss Bordereau and her niece to see if he can get the papers somehow.  He’s helped by his friend Mrs Prest who, because of their American connection,  happened to know where they live.  The women are not starving but they are surviving without much money. 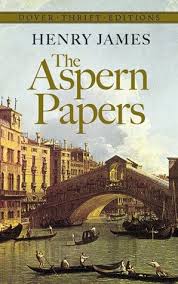 The very charming but shady journalist gains admission to the Bordereau home and then to Tita Bordereaux,  the plain, middle-aged niece.  On the next day he is introduced to Juliana,  the subject “of some of Apern’s most exquisite and most renowned lyrics.”

Our hero rents a suite of rooms for a rather steep price.  The Bordereau’s need the money.   He agrees to it,  but if he’s going to pay that much he’s determined to get the papers for nothing,  probably by toying with the affections of Tita,

This is great the stuff of the best of Henry James in the tradition of his shorter middle works – like The Turn of the Screw and Daisy Miller,  but different.

The setting is perfect,  James did live for a time in Venice and loved the city.  He wrote often about Americans in Europe including in Italy.   As always with James,  the characters are well defined or “rounded” as they say,  and in this case they are at their best.   Still,  James manages to make them all quite mysterious.  Also,  there’s a certain ghostly quality to it – the “presence” of the deceased Aspern,  the crumbling mansion,  two old lovers of which one of the beloved is dead,  the use of the word “ghost” or “ghostly” and “phantasmagorical.”

It was good to be reading James again.

3 Responses to The Aspern Papers ~ by Henry James