The Growth of the Soil by Knut Hamsun x2

There is so much enjoyment in reading a book a second time especially when the novel is a classic with so much substance as Hamsun’s The Growth of the Soil.   I read it maybe 15 year ago at the urging of my son who had come across it and thought I’d enjoy it.  Yup – I surely did.

And I chose it for my selection at 19th Century Literature where, although it was published in 1917,   it technically qualifies because most of Hamsun’s works were written in that time frame.   However,  on the other hand,  as a book it does not belong in 19th century lit at all because Hamsun changed his style to Norwegian Realism,  an early form of modernist literature.

This is a ode to the common farmer who is independent,  works very hard to clear and work the land and tend his animals to produce food for his family and some to sell.  It’s the story of a successful man who sets up a small place in a “vacant” area of northern Norway and over the years,  makes it thrive.  He finds a wife and has children and patiently waits out the storms that ebb and flow around him.   He befriends his friends and forgives much.  He cares for his family and forgives much there, too.

There are other obstacles – the weather,  industry, cheats, lazy and/or gossipy neighbors,  the government, and so on.

The message is that it takes a country full of men like this,  devoted to hard work on the land, to make a real nation.

On the surface,  Isak,  a common enough young Norwegian man,  sets up camp in a remote part of Norway –  I think the time is about 1860 or so – before the switch to the Kroner (1875).   He sees a few Lapps there but no settlers.  He starts a little farm,  works very hard, improves it, adds to it, makes it thrive.  Over the years he is a real success.

My great-great grandfather outside his cabin near Hol, Norway in the 1840s – just prior to immigration to the US. Note the sod roof.

One day early in the tale,  young woman named Inger comes along and offers herself to him as a house helper – she has a hare-lip and wants to get away from her village.  Isak accepts her and one thread in the novel is their lives as individuals and together.  Inger brings a cow.

Oline,  an older woman from Inger’s village comes to check on her and the cow.  Oline is sneaky, gossipy and a bit greedy.

Inger’s third child is born with a hare-lip and she murders it.  Infanticide is a huge theme – and a real-life concern of Hamsun.   Inger goes to jail and comes back changed into a more urban woman.   She bears more children and goes through her own changes.

As the years go by neighbors move in to farm but Isak’s land,  which he has now bought from the state and named Sellanraa,  is further up than anyone else.  Then copper is found on a piece of his land,  he sells that little piece and mining operations move in as does a store with a rather uppity owner.

The children grow and of primary concern are the older two,  both boys.  The eldest is Eleseus who is very smart in the ways of books but lacks something of a work-ethic.  Sivert is named for a rich uncle but is really a farmer at heart. 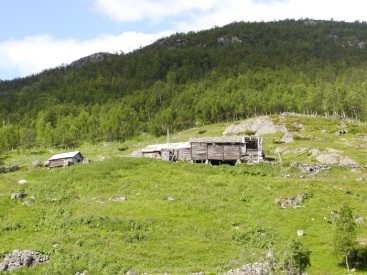 As the years go by the industrial revolution makes itself felt and the local farmers acquire machinery.

The characters are hugely important in this novel – as in most social commentaries they are of a varied sort,   farmers of different  kinds,  a store-owner,  a rich uncle,  a bureaucrat-trader,  a miner, and so on.   The women are also different from each other but one of the main ones,  Inger changes a lot.  The story is as much about human nature as it is about the glorious life of simple honest living off the hard work of making the land and the women productive.

The structure works incredibly well on the kind of long-term, multi-character  story Hamsun is telling.  There are 31 chapters of about equal length.  In each chapter the time frame has advanced a few years and the narrator catches the reader up with the events of several characters’ lives,  about as well as zoning in on one or two events specifically.  The result is like looking at a beach and seeing both (!) the larger area as well as the grains of sand.  Difficult to do, and probably risky,  but it worked.

Themes abound – there’s nature,  of course,  and the idea of a simple honest and hardworking man living off the land in accord with nature is powerful.  Especially when he’s very successful.  And he’s always building – either on his own land or planning for something for his son.  The family/nation is growing?

Another theme has to do with the nature of man,  how laziness,  greed,  lust and pride show up in virtually all people,  men and women,  young and old,  and it destroys them.

Positive family values are vital to this project of building a successful farm/nation  so Isak, our super-hero of sorts, is quiet, loving, generous within reason,  shrewd, patient, forgiving, and so on.

Relatedly,  the idea of how the younger generation is getting more and more immoral is strong.  Perpetuating all of this is the expanding urban influence on young people.

Christianity is an important theme but it’s subtle – nature is a more powerful force than church.  Isak does see some eyes in the night and wonders if he’s met God or the Devil.  He tells Inger and changes his ways somewhat.  Conversion was a part of Inger’s changes.  The children are “confirmed” in the Lutheran faith and take communion –  Oline has a rather superstitious idea but Inger’s is more about repentance.   Only women are religious.

Some criticisms –
*Reading this in the US in the 21st century*  (and it was NOT written for us)  I see the way the Lapps are treated – they are regarded as sneaky with shifty eyes,  begging coffee and milk and even old socks.   On page 63 (Kindle) the narrator acknowledges that Inger has “an unchristian hate of all Lapps.”

The women are treated as property plain and simple –  suffrage is discussed in one paragraph and that’s it.  They can be devious though – Isak is the only truly “good” character in the book and he’s almost unreal – almost.   The book ends with with a seriously romantic notion of the men coming home to find the women barefoot in the fields working while the older woman is inside cooking the meal.   Infanticide by mothers is a much larger issue.