Posted on November 29, 2016 by beckylindroos

Although I read the publisher’s blurb and saw some good ratings (just the stars),  I didn’t quite expect this. I don’t know what I expected, but it sounded fun and it was on sale. 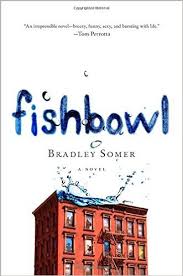 Basically this is the story of a fish named Ian who lives in a goldfish bowl in an upper floor apartment of a Sidney (?) apartment house.   One day the bowl slips out the window of the 25-story building and Ian the fish is able to get free – which is what he had been wanting.

The story is more what’s happening in the apartments beneath him than it is about Ian and then what he actually observes although there is  a bit of what Ian thinks as he glides down.   And the main focus is on the other characters,  the lonely superintendent, a phone-sex worker,  a pregnant woman in labor,  a hidden transvestite, a 12-year old boy and his grandfather who is homeschooling him,  a man who is cheating on his girlfriend,  the girlfriend, the mistress, and maybe one or two others.  They are all going through some serious issues (birth, death, sex)  which they are in the middle of dealing with.  In addition the elevator gets broken and so a few of them have to take the stairs and meet each other.  The action all takes place in about 30 minutes,  but there are flashbacks and quite a lot of introspection from the characters.

The fish, Ian,  is also a character,  and we get a little view of his ideas which are mostly about how great it is to be free.  (He’s always wanted to fly.)

It’s a funny book,  and it ends very nicely,  IF your sense of humor matches that of the author.  I think Somer was trying to be profound on some level,  but it must have glided by my floor on its way down.   Something about how we’re all dropping through time?   Or we live our definitive moments within each tick of time?  But I must say there’s really too much sex in it for my tastes.

For what it’s worth,  Peter Berkrot’s voice is kind of off-putting at first but then it gets more comfortable – usually.