Musseled Out by Barbara Ross

Posted on November 27, 2016 by beckylindroos

Once in awhile a book so bad comes along that I just have to say so.  This is that once in awhile.  Don’t bother.   First,  I made the mistake of trying out #3 in a series which really is a series.  Second,  it has too much romance for me (although there really isn’t that much).  Third,  the narrator’s voice was grating.    It was all I could do to finish 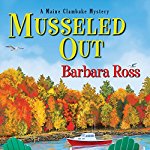 Don’t bother –   a bit of murder and mayhem amongst the lobster fishermen of northern Maine – heavy family involvement along with the ownership of a restaurant (of sorts).  But the season is over and there’s not much money being made.  Nevertheless,  Julia, who works in the city,  finds herself wanting to stay basically because of a guy named Chris.  Then a body is found beneath one of the boats.  And another man goes missing and a woman is poisoned.  It gets complicated.

4 Responses to Musseled Out by Barbara Ross