The Wrong Side of Goodbye by Michael Connelly

Posted on November 3, 2016 by beckylindroos

Well true to form, by Chapter 4 our hero, Heironymous  (Harry) Bosch – ex-LA detective extraordinaire – who was forced to retire a tad early forthrowing his boss out a window,   is already defying authority and broking  rules.  But the man has to keep his hand in – it’s just who he is. 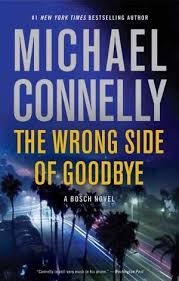 So like the more recent books in the series,  Bosch is working two cases at the same time   Case #1,  by far the more interesting of the two, concerns a very rich, old and never married man who wants to find out if he has any descendants  Bosch works as a PI.   Case  #2 concerns a serial rapist in the small community of San Fernando (north of LA) where Bosch is working part time for free (and bennies).  This one is pretty formulaic in my opinion – boring,  females in jeopardy, ho-hum.

So as I said,  Bosch is the star and he’s his usual arrogant self, breaking rules and regulations as he sees fit,  but raging when others do it,   insisting on fast service even when there is no emergency,  intruding on his daughter’s life a bit more than she wants, etc. But there’s a softness in him in this book which I don’t remember in prior novels – maybe it’s the nature of the case or maybe he’s mellowing -(or maybe I forget).

And Bosch is smart – he does figure things out even if Connelly  doesn’t alway let the reader in on it. I seem to like both him and his step-brother, Mickey Haller.

The thing I like best about Connelly’s novels is how he keeps you guessing in a really subtle way.  Something happens and you have to wonder what connection that has so I make up my own little possibility which is later either verified or dismissed.  This happens in almost every single chapter and includes questions of who, what, when, where and why.  Then,  as if that’s not enough,  there are surprises and twists out of nowhere.  I think  I’ve read all the Bosch books and all the Haller books.

Titus Welliver is an excellent narrator who allows the reader to think Harry is maybe younger than his 70+years (21st novel).   –  Maybe he’ll have a whole new career here.

2 Responses to The Wrong Side of Goodbye by Michael Connelly