Posted on October 1, 2016 by beckylindroos

Finished a few days ago and am finally writing it down –   I’m not a huge Dickens fan but I’ve enjoyed many of his books over the years  – they’re kind of fun when I’m in the mood and actually quite interesting as historical artifacts in that they tell us 21st century readers quite a lot about life in the times of the great Boz.   I read Domby & Son for a college course in the History of 19th century England – good stuff.  And I did a fairly intense study of A Tale of Two Cities with GoodReads several years ago.   I’ve read most of his other novels between times – not all, though. 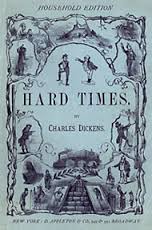 Hard Times has more social and economic material than most of his other works -than any of his other works I might say and it’s shorter, too.   The first three or four chapters set up the times in terms of his themes from Dickens’ point of view – the socio-economic problems,  education, child-raising,  the environment and mostly the clash of business interests versus the poor.   The story line commences from there with an occasional interruption for the narrator’s comments.

The novel is set in Coketown,  a small industrial town  somewhere in central England where Tom Gradgrind owns and operates the school and runs for Parliament.  Gradgrind is the ultimate utilitarian (although the term is never used) and conducts the school and raises his children by the “facts” only method – no room for “wonder.”   He has five children but only the eldest,  Tom and Louisa, and their lives are featured.    Josiah Boundarby is the rich factory owner and banker who sees things much as Gradgrind does.
Mrs Sparsit is a widow of diminished means who depends on  Boundarby for her living expenses.  Then there’s Stephen Blackpool   and Rachael, very poor workers at the plant which is trying to unionize and James Harthouse who comes to town seeking his fortune.  THere are other characters associated with a circus which comes to town – Sissy Jupe, the child of one of the performers becomes quite involved in the plot as a whole.

The plot itself is a bit twisted like a good Dickens novel should be,  but the focus and denouement tends to be on the theme or satire if you will,  against utilitarianism.

I enjoyed the book quite a lot, but Bleak House remains my all time favorite with A Tale of Two Cities second.