Disappointing by comparison to Cyberstorm but it’s okay.  I just so enjoyed Cyberstorm I went right ahead and got Darknet by the same author.  Cyberstorm had almost everything plot, characters, writing woven together for some really believably delicious suspense and ideas about contemporary issues as well.  Darknet is missing the some of the great characters and some of the believability – almost as if it belongs in fantasy – not quite. It does have some great discussion of issues, though-  the cloning of corporate entities and their powers in particular. 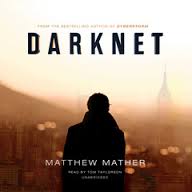 It starts out fine – the first chapter opens with Sean Womack waiting on a busy street in London.  He’s got one hour to go before something called the  “assassin’s deadline” happens.   The thing is that “they” are after him.  From a public phone he tries to place a call to someone named O’Connell. He leaves a brief message,  but then a bus crashes into his phone booth.

In the next chapter  an ex-con named  Jake O’Connell is working in a very lucrative job at place called Atlas Capital,  a financial brokerage on Long Island.  He  has a family and the life-style to go with his salary.  It would be best if he didn’t do anything out of line – getting caught would end his world.

But the firm  and its employees are apparently in trouble,  being audited as well as being investigated by the SEC on money laundering charges,  stealing pensions from retirees –  something.  They seem to be looking for a fall-guy.    Dan Donovan, the now very rich chairman and founder,  hands Jake a memory key before their meeting ends with the cops at the door.  Jake doesn’t want the key, but  too bad.   he’s got it – the passcodes to locked accounts.   Soon there are lots of deaths.

Jake gets back to Shawn but is it really Shawn Jake talks to and gives info to?  He  thinks it’s Shawn but the reader knows there’s something fishy going on.   And therein lies a chunk of the plot.  Machines have taken over a number of human functions – talking on the phone and filming and murder are a but few.  A good guy doesn’t know who he’s dealing with – is that guy on the phone who he says he is?

Meanwhile,  we’re whisked off to Tokyo where one Doctor Yamamoto is concerned about Atlas Capital and Donovan.   Whatever is happening is international and when Yamamoto dies and then his assistant dies it leaves Jin Huang an American data analyst and consultant to look into the information she’s been collecting.  Her friend saves her and they along with a couple friends form a little team – vulnerable to more deaths.

So Jake is now in trouble with the law because not only is he wanted for securities fraud but also for rape (an employee of Atlas has turned him in rather conveniently for the company.  So he violates his bail and heads on up to Mohawk lands in Canada working with his old friend Dean but the Darknet knows no national boundaries.

I’ve noticed that Mather likes to play with some themes in his novels –  a huge one here is the vulnerability of the internet coupled with the legal nature of corporate entities and accountability.  Another idea is the international scope of computer-based  finance – from Japan to Mexico,  China to Mohawk lands,  London to ?? – and from the billionaires to the peasants wanting paychecks.  It’s all connected.

But as I said at the outset – there are several problems with Darknet.   One is that the characters are not well developed like they were in Cyberstorm.   In Darknet the characters multiply as the narrative moves through the layers of intrigue and end up being too many to keep track of.  The premise of Cyberstorm is completely believable – nothing ever goes over the suspension of disbelief – this is not true with Darknet.   It’s an interesting concept but the development is kind of contorted with too many threads going too many places.