I’m a long time and hard-core fan of Don DeLillo -(as many of you already know).  I remember standing in the narrow aisle of a little indie bookstore back in 1998, reading the entire Prologue to Underworld,  then brand new on the NY TImes Best Seller List. I was mesmerized,  bought the hard cover and read the whole thing that very week,  completely absorbed and in love with the language and  themes, the images,  the ideas.

ZERO K  is a thoughtful and haunting continuation, a broadening in many ways,  of many of those same ideas.  These are the themes he has pursued since he started writing –  language,  identity,  vague existential paranoia, memory, film, media,  art, the naure of reality, of life and death,  patterns, families,  our connectedness – or dis-connectedness as it may be.    But With Zero K we have the addition (I think) of a couple twists,  the technology grid, capitalism and  the possibility of environmental and political disasters,  etc.   All of these are put into a different context(s)  for Zero K.  with different characters in different situations and possbilities – death or not death and the grey area between. 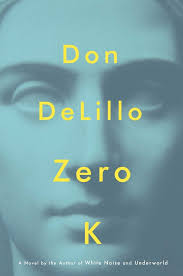 Artis Lockhart, the stepmother of  Jeffrey Lockhart,  our 30-something first-person protagonist,  is in the final stages of multiple sclerosis and physically deteriorating with a lot of pain.  Death might be preferable.  So Artis and Ross Lockhart,  Jeffrey’s insanely wealthy father,  have decided she should go to a remote cyrogenics facility where she will be placed in a kind of very deep hibernation until treating her ailment is feasible – it’s a kind of semi-death.  Ross wants son Jeffery to accompany them.  Jeffrey has some problems with this whole idea as well as with his father,  but he goes.

The facility,  known as “the Convergence,”  is funded at least in part by Ross and physically located in the remote desert near Bishkek, the capital of Kyrgyzstan – about as “nowhere” as you can get.  And it’s a  rather bleak and utilitarian place, providing for all basic needs,  but  lacking in human comfort.  Only the mystical character of the Monk seems more  human and rather out of place.   There are guides and employees at the facility as well as other “dormants” who are stored in cryonic  capsules or pods.

The Convergence is managed by a couple of bizarre scientists, the Stenmark twins,  and is  really rather spooky,  but it supposedly provides an environment safe from all sorts of worldly disasters.   Films are shown of the worst of what is going on in the outside world – environmental collapse,  wars,  etc.

After taking care of Artis,  Jeffrey and Ross return to their day-to-day life in contemporary technology-saturated New York  where Jeffrey is an unemployed consultant/analyst and dating a divorced woman named Emma who brings to their relationship a strange adolescent son named Stak –  a strange kid but likable. Ross, on the other hand who is alone,  incredibly lonely – adrift really –  and decides to join Artis because life without her is unbearable. Besides,  he feels he ought to be able to control his own destiny – as usual.    Jeffrey’s  attitude toward his life, and its components is changing.

I won’t say more – I strongly encourage DeLillo fans to read it pronto -and if you’ve not encountered the works of Don DeLillo get started.   This is  DeLillo at his finest –  only Underworld and possibly The Names stand higher.   Although this is a completely original work,  I’m strongly reminded of his prior novel,  Point Omega,   and maybe in some ways,  The Names.