An Innocent Client by Scott Pratt

What a nice surprise  – I got the book only because it’s a legal thriller and it sounded interesting.   But it turns out I read an earlier book by Pratt,   Justice Redeemed,  back in December.  I only discovered this because the narrative describes a prior case of the same lawyer and I totally recognized it but checked it out to make sure –   yup.  And now this is the first of a series of about 7 books.   Oh,  I am in b’worm heaven!

A preacher is found dead in a hotel room in Johnson CIty, Tennessee.   The really weird thing is that he’s missing his penis.  Coincidentally,  a personless penis is found near under the bridge just a bit later.  Voila – they match. 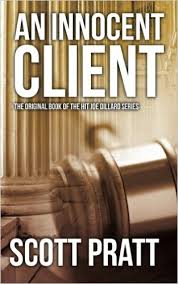 Joe Dillard is a good criminal defense lawyer,  but he wants out – no more defending sleaze-balls.   So he and his wife, Caroline, have moved his practice into their home where she now works as his paralegal.

After the preacher is found murdered a stripclub waitress named Angel Christian  is arrested.  The incredible character of Earline  Barlow,  Angel’s mother-figure and the club owner, comes to visit Dillard and pays an enormous sum for her defense.

It’s going to be a high-profile and politically important case.  People have scores to settle and there’s an election to win.  Furthermore,  some folks have heavy emotional backstories to deal with.

Pratt throws in a lot of juicy characters and a few extra stories to establish ambiance.  One thing leads to another all over the place.  But he knows the legal biz and writes some interesting and suspenseful tales.  Recommended if for anyone who enjoys legal mysteries.