The Incarnations by Susan Barker x2

This must be my year of rereading – I’m doing a lot of it.  I read this just last month and I really disliked it (see review)  but several members of my group enjoyed it quite a lot.  Hmmmm…. I was put off by the sex and violence which, to my sensitivities, went way overboard.  Oddly enough – it’s generally historically accurate.

Anyway,  I thought I’d give it another shot and I am so glad I did.  Having managed to get through the sex and violence the first time (this is not for the squeamish),  it didn’t really bother me the second time -no more shock factor,  I guess.   (And that’s just like the rather weird sex in Avenue of Mysteries by John Irving which had me skim the first time to get it over with.) 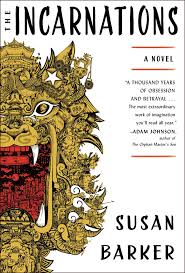 This is an absolutely exquisite work of  historical ficiton which takes place in China circa 2008,  but with interior stories from the 7th century (Tang Dynasty), the 13th century (Jin Dynasty),   the 16th century (Ming Dynasty) , the 19th century ( Qing Dynasty) and the 20th century (Cultural Revolution).

In the frame story a Bejing taxi driver starts receiving strange letters from someone who apparently knows a lot about him and his 5 past lives.    He suspects his friend Zeng with whom he has been having an on-again/off-again sexual relationship although Wang is married to a woman he loves and they have a child they both adore.  Wang has other problematical issues in his life – the son of a rich and corrupt bureaucrat and his deceased wife –  Wang now has a stepmother and his father is aging badly.  The New wife is his aging mistress from the 1980s.   It comes to be revealed that Wang had a very unhappy childhood,  a breakdown in college and then a stint in a mental hospital.

The structure of the book makes the identity of the person sending the letters and pages of “incarnation” stories a bit difficult to puzzle out because the letters are often separated from the stories.   Figuring out the identity of the sender is the main plot line – who is Wang’s soul mate?  Who is the 1st person “I” in each story to Wang’s “You?”

Each of the stories is more like a novella within the novel but it works beautifully because in addition to its own plot line,  this reader was trying to figure out how bits of it fit into Wang’s life – there are interwoven connections.

The historical research which went into this is wonderful – I googled and googled.  And made copious NOTES >>>