Posted on February 12, 2016 by beckylindroos

I love the cover of this book!   And inside,  although it starts a bit slow, it certainly doesn’t disappoint!  This is a very engaging, funny, intelligent, heart-warming, (perhaps bitter-sweet is the word I want but don’t like)   debut novel generally about life in a  Jewish immigrant family of mathematicians.   It’s a kind of loving celebration of that life and death as they say good-bye to an outstanding woman who was a brilliant mathematician as well as a wife, mother, teacher,  mentor and activist for defectors from Russia where she had had an incredibly difficult time as a child in the gulags. 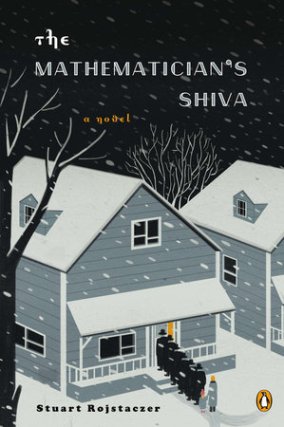 The book is divided into 3 Parts but 4 time frames which overlap a bit in places due to story-telling and back-stories.   It starts out in winter of 2012,  eleven years after the basic tale the first-person narrator wants to tell which is of the death, funeral,  shiva and the aftermath of his mother.

Rachela Karnokovitch was a noted Russian defector/immigrant and mathematician as well as the mother of our narrator Alexander”Sasha” Karnokovitch.   At the book’s opening (2012)  Sasha is remembering back to the day she phoned (2001)  to tell him she was dying and wanted him there with her at her home in Wisconsin.  So Sasha, her only child and age 60, drives from Nebraska to be with her and she is then moved to the hospital.   There are others present  – Rachela’s brother Shlomo as well as her  ex-husband who is  Sasha’s father.  Uncle Shlomo brings the booze.  Sasha promises his mother that he and his father will stay connected and after she passes the two decide to have a small, simple family shiva at her house.  Bruce, Uncle Shlomo’s son,  and Anna,  a defector Rachela took in many year prior arrive a bit later.   This is the family.  >>>>MORE (No spoilers)>>>>

1 Response to The Mathematician’s Shiva