Posted on December 29, 2015 by beckylindroos 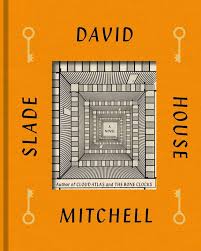 I’ve been reading David Mitchell since Cloud Atlas, 2004, and then went back and read his priors.  I run hot (Cloud Atlas) and lukeish (Black Swan Green) to cool (The Bone Clocks).   I was going to get this book as soon as it hit the stands (o cyberspace?) but then I heard less than glowing reports and thought about it.  Looked at it again today and it sounds fine if you know what to expect.

I was hugely disappointed in The Bone Clocks – way too much into the occult wars.  This supposed to be similar, but I read A Headful of Ghosts by Paul Trembly which is literary horror of a sort and I really enjoyed that, so I thought maybe now I’ll know how to enjoy Mitchell’s alternative universes. >>>>MORE (no spoilers)>>>>