Posted on September 2, 2015 by beckylindroos 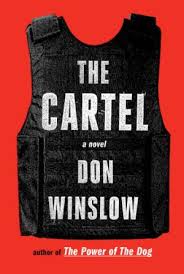 Good stuff but very intense.  I happened on this just browsing Audible – I’ve read Don Winslow in the past but something is different here – this is not a B-level surfer-detective story.  This is fictionalized true crime – horrific true crime.  And it’s really kind of scary when you sit back from the narrative and realize that this is going on not on the border but it’s expanding.

The Cartel is a kind of sequel to Winslow’s The Power of the Dog (2006) which I haven’t read but really want to now – later.  (I need some rest from the intensity.)   That book deals with the origins of the Mexican drug gangs – up to the 1970s. In The Cartel Winslow’s focus is more on the younger generation of drug lords as they take over with increased violence and greed. He also deals with the confused and ineffective US response. >>>>MORE>>>>