A Brief History of Seven Killings 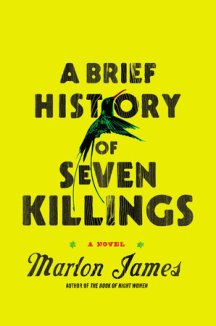 A Brief History of Seven Killings
by Marlon James
2014/688 pages
Rating 9.5 / contemp. fiction –  literary crime/historical
Read by a “cast”  (I read and listened to this one)

“And if a western needs an O.K. Corral, an O.K. Corral needs a Dodge City. Kingston, where bodies sometimes drop like flies, fits the description a little too well.”  (p. 84)

I alternated between reading and listening (about 1/2 – 1/2) to this interestingly fictionalized and blazingly brilliant narrative(s)  focusing on the attempted murder of Bob Marley (“The Singer”)  in the gang-ridden, socio-political anarchy of Jamaica of 1976 but continuing through 1991 or later.   And although Marley was not killed in 1976,  there was a huge violent aftermath to the shooting and so,  as a character says,  >>>>MORE>>>>