This is satire and the point of the title is that “it CAN happen here.”  And that if it does,

“The tyranny of this dictatorship isn’t primarily the fault of Big Business, nor of the demagogues who do their dirty work. It’s the fault of Doremus Jessup! Of all the conscientious, respectable, lazy-minded Doremus Jessups, who have let the demogogues wriggle in, without fierce enough protest.”  p. 14

It’s definitely a period piece which holds relevance today and okay,  although I ended up being wonderfully well satisfied with the novel,  quite honestly, I struggled to get through parts of  it because they are kind of too real right now to take as satire.  Meanwhile other parts get kind of bizarre to fit with the reality we have.  (And that’s maybe why it’s important because what did we say before our current president was actually elected?) 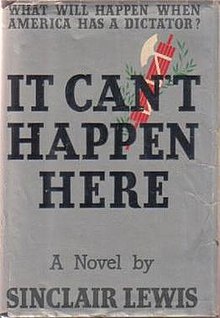 Context here is everything, so, like Orwell’s 1984,  Lewis’s novel is  a futurist political-dystopian fiction which was aimed at US readers of 1936. The Great Depression was in full swing,  and while Mussolini was riding a wave of popularity,  Hitler was only starting to be perceived as a possible threat and between the two fascism was seen as a positive thing in much of Europe and the rest of the world.  There were far worse fears of Stalin-esque Communist dictatorship at home combined with unemployment and racial tensions. Times were ripe for a populist type fascism leading to ugly dictatorship.

Fwiw, the book received mostly kaudatory reviewers at the time with one who “com-mended Lewis for his audacity, if not his artistry. ” (This info is in the “Afterward” by Gary Scharnhorst,  which is also very good.)

Do I recommend it?  Not really. My reading preferences are a bit different in that I’m a history buff and appreciate classics because they give a bird’s-eye view of the historical times and this novel contains a LOT of period-specific real-life people/characters and allusions in addition to its own era of nostalgia. It’s an actual and realistic reflection of the socio/cultural ways of the era. Many (many)  of the names are taken from the newspapers of the day, politicians, criminals, evangelists.  Life as it was in the 1930s

Fwkw,  Huey Long died in 1935,  but the immensely popular Father Coughlin was broadcasting until 1939 when he was removed from the air and mail (pretty blatant government censorship directed at him) for being too anti-Semitic and pro-Hitler, Mussolini and Hirohito. (Germany had attacked Poland by that time.)  Still, it wasn’t possible to make It Can’t happen Here into a movie because it was too controversial and might not be good for our relations with Europe ($$).

I’m convinced the book was great at the time and for the times and I kind of wish someone would write something along these lines now using our own brave journalists and media stars.  Oh well,   it is what it is.

Lewis is at his best in showing how populist leaders get elected and turn into dictators of totalitarian states. It might also be a sort of pre-primer on how to organize an underground opposition to a dictatorship – but that’s limited because (no spoilers).    That happens, too, and there is some real excitement.   (~ again, no spoilers~ )

Sinclair Lewis is not the easiest novelist to read.  He’s overly wordy by our standards and he wrote this very quickly.   inserts a lot of period information,  names and little tidbits about characters espec-ially.  .

Finally,  the plot line is okay but kind of standard with only a handful of really interestingly developed characters.  Luckily,  Doremus Jessup our protagonist, and his small family are among them.

On the really positive side though,  is how it hits the nail on the head for what has happened in the US since about early 2016,  and why.  That’s to about half-way through the book,  until the almost immediate take-over of all sorts of things by the new president days after his inauguration – like making the congress an “advisory” body and shutting down newspapers and making a 15-point proclamations which pretty well eviscerate any kind of democracy as we know it.

Fascism might wear different colors but it has the same goals and methods –  totalitarianism via populist support,  the shut-down of opposition in speech or the press,   In Lewis’ book the new ideology is called “Corporate State” and the Patriotic Party.  Supporters are called “Corpos’  and the equivalent of the Brown Shirts (in Hitler’s Germany) are the Minute Men.  It gets rather graphically violent.

Sinclair Lewis is not the easiest novelist to read.  He’s verbose by our (my) standards. That said,  the novel reflects 1936 with real intensity while it unintentionally projects our own times in 2016 and with pretty fair accuracy. (But  that’s because the tactics of 20th century fascism are pretty much the same across countries –  See Madeleine Albright’s “Fascism”  –  link to my review on this site.) .

The story itself follows Doremus Jessup,  a moderately liberal,  small town newspaper editor from northern New England,  as he stews and writes about the candidacy of Berzelius Windrip who gets a lot of populist support.  Windrip promises jobs and money and runs on a really ugly 15-Point Plan which makes no mention of free speech or other rights.

After he gets in office he clamps down on opposition,  makes Congress into an advisory body,  starts up the Minute Men and opens camps for dissidents – among other things.

https://en.wikipedia.org/wiki/It_Can%27t_Happen_Here
interesting overview or summary (spoilers) and an update re Trump

The book sold out online right before the 2016 election: http://time.com/money/4573801/sinclair-lewis-it-cant-happen-here-amazon/

2 Responses to It Can’t Happen Here ~ by Sinclair Lewis