Oh my!  A second reading of this book just blew me away.   I first read it in December last year my review on this site),  and didn’t give it anywhere near the attention it truly deserves.  I just read it at the surface level so it seemed like a YA suspense novel with a bit of an ethical dilemma to chew on.

About 10 months and 150 books later I didn’t remember a lot so when it was scheduled for the  Booker Prize reading group I reread it.  The first read was listening only and I started the second reading the same way but then, about half way through,  I realized that wolves are predators and looked up a bit about them.  And as I read and listened with a bit more care it all clicked in, piece by piece.   It deserved it’s Booker Short List nod. 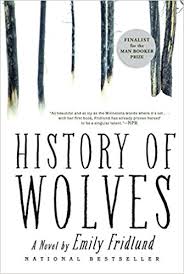 So yes,  a second reading  was definitely worth it!  Instead of being a YA suspense novel involving the death of a child it’s a very complex character study of a strange 15-year old girl whose parents are basically detached from emotional involve-ment and a second “family” who are overly enmeshed with their own son.  Meanwhile, in the background,  there’s a teacher accused of being a sexual predatorwho may or may not be guilty of the charges,  but has his own problems.

The book is loaded with themes – perhaps an overload.  There are families with or without love and nurturing.  Responsibility plays a huge part.  And there’s what do you believe – do you really believe what you say you do,  what you want to believe?  Do your thoughts make you guilty?  Or your actions only?  Where does a 15-year old fit in the development of a wolf?  Predator or prey?

Be warned here – this is a review of my thoughts on the whole thing so there are spoilers!!  If you haven’t done so go read the book first, read it thoughtfully,  carefully,  because it’s a study in wolfish behavior, predatory behavior, prey and camouflage

Linda Furston (aka Madeline) is 14 years old in 1990,  turns 15 during the book, She and her parents live at a deserted hippie commune somewhere around Bemidji, Minnesota. With the descriptions of the forests and lakes, hunting and fishing, plus the cold weather and country ways it feels like it.  In a way,  the setting describes the people, too,  although the main characters are all outsiders in one way or another.  People are isolated and alone in their own ways,  searching for answers and connections.  Linda is a loner,  capable.

For a high school history project,  Linda studies wolves, but she has some of the same traits – acute sensory awareness, stealth, camouflage, but she has her own needs, too.  She needs mothering for one thing and comfort and someone who thinks well of her.  She’s half grown and neither predator nor prey,  but she knows intuitively,  and is certainly learning

Later in the book Linda observes what transpired  from the vantage point of age 26  and then 37.   These ages are the ages of the other major characters at various points and significant in terms of maturity and needs.

Adult wolves are predators but their young are often prey.  Linda’s new history teacher is a predator. The child Linda babysits for dies thanks in large part to his parents’ practice of Christian Scientism.  Dad there seems like a bit of a predator what with his young wife and so what does that say of Christian Science?  It’s definitely a theme of sorts.

Linda is quite observant of people and nature, but she is a loner and very vulnerable, getting herself into a peck of trouble.  At age 26 she still has some problems dealing with her part in the death of young Paul.

3 Responses to History of Wolves ~ by Emily Fridlund x2