Dispatches from Pluto: ~ by Richard Grant

Posted on October 5, 2018 by beckylindroos

Recommended by a friend several week ago, I really enjoyed this as a break from the Trump/crime/heavy lit material I’ve been reading.  It’s lighter but not at all “fluffy.”   Yes – I so needed the break and this proved to be a thoughtful one.   A definite winner!

Richard Grant and his girlfriend were living in a shoebox apartment in New York City when they decided on a whim to buy an old plantation house in the Mississippi Delta. Dispatches from Pluto is their journey of discovery into this strange and wonderful American place. Imagine A Year In Provence with alligators and assassins, or Midnight in the Garden of Good and Evil with hunting scenes and swamp-to-table dining. 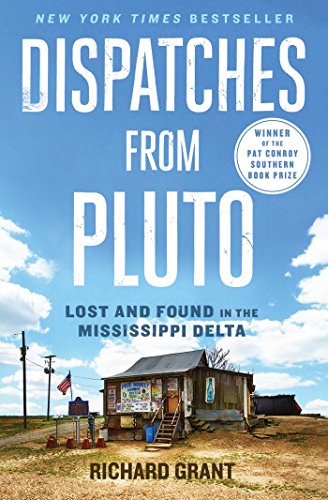 I’ve read plenty of travelogues and although this was my first by Grant,  I can tell he’s experienced and well regarded.  I’ll be reading more.

The scope is wide with the structure going from light and even humorous to bleak and maybe scary.  You get the feeling of what good Southern-like  writers are writing about when they write what’s called “gothic” and way slavery seems to kind of haunt so much of it while focusing on food and family and religion as well as race and tradition and spots of wealth amidst the poverty.  Sometimes it’s real scary to change – for any “side.”

Grant and his girlfriend Mariah moved to a large old house on a small piece of land near the center of Mississippi – near Money,  MS.   The house payments were less than their old rent in NYC had been.   The county is very rural and the population had decreased for decades.  But after they move he doesn’t stay in one town,  Richard visits many places throughout the state and the focus is on the culture and society today rather than the history or geography.

Richard, complete with his English accent,  learned to eat and hunt while Moriah, also eating contemporary Delta food,  learned to garden and clean and talk with the Southern ladies of the area while she worked on her masters thesis.   The accent comes up for discussion every once in awhile,  scattered throughout.

“This is an extraordinary place that sort of defies explanation,” he said. “It causes people to try to explain it through writing, through music,” Grant said. “I think it has one of the deepest, richest, most contradictory cultures in America.”   From an interview with Grant at: https://www.theguardian.com/us-news/2015/nov/15/poorest-town-in-poorest-state-segregation-is-gone-but-so-are-the-jobs

This is the blackest and poorest county in the blackest and  poorest state in the union, as well as the most corrupt,  so there is plenty of material about the race issue,  historical and contemporary as expressed through many avenues,  crime and the criminal justice system,  education, tradition and so on.  There is racism all both sides. Each of these has its own chapter and the one on education really struck a personal chord with me.

A couple of the opinions and ideas expressed by the folks Grant interviews were relatively new to me (this is good).   The book presents both the lush beauty of the landscape as well as the ingrained corruption of the culture(s) from top to bottom and sideways.  There are old family networks which both blacks and whites have going on in different ways and in different places.

And there are more churches in this county than anywhere else in the US so everything is affected by religion,  even crime in a way.

Of course,  there is a great deal deal of Southern hospitality provided to Grant and Mariah with lots of food and bourbon plus beer,  there’s all  kinds of hospitality described,   black, white, mixed, neighborly, church member, barroom, etc. political, community,  etc.   to say nothing of all the parties associated with a Delta wedding.

The current situation is that the races are no longer legally segregated as in apartheid of old,  but they are segregated by attitudes and preference.  There are many kinds of racism and in Grant’s opinion the worst situation is in education.  People are becoming less racist on the whole but that can change if there is an incident.   Prejudice is pervasive along with corruption and outright racism and criminal activities.

And some of the scenarios he describes were also completely “foreign” to me – I’m familiar enough with hunting deer and ducks,  but the old blues and jazz parties?  Nope –

One very nice thing which was emphasized to a point,  was that politics do not matter when folks are just being neighbors when folks have troubles.  And there are some wonderfully quirky and very Southern,  rich, poor, black, white and even of Jewish and Chinese ancestry, characters described.

2 Responses to Dispatches from Pluto: ~ by Richard Grant