Posted on September 30, 2018 by beckylindroos

This is an amazing book for readers of True Crime and/or memoirs.   I love really good True Crime although I’ll certainly admit much of it is junk.   James Renner was a lowly journalist working in the dailies we find free at restaurants and hotel lobbies until he was fired. He was also working on true crime novels and he turned to that more seriously when he got interested in the case of a young woman from Amherst Massachusetts who went missing somewhere in New Hampshire in 2004,   Maura Murray. 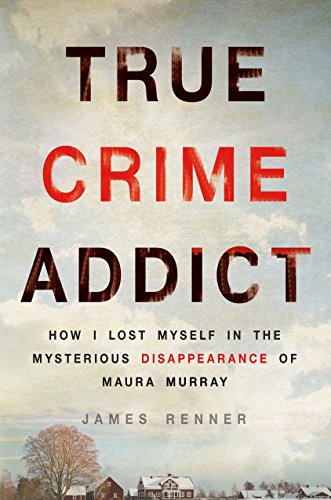 *******
True Crime Addict:  How I Lost Myself in the Mysterious Disappearance of Maura Murray
by James Renner
2016 / 300 pages
rating:  8 – A+/  memoir-true crime
*******
He went to started his normal searches via public documents and records and then on to interviewing people.  It was all an uphill climb as no one involved wanted him,  or his possible book, around.  This included friends, neighbors, her family and especially her father.

Meanwhile his very young son was having behavioral problems and that is an issue which continues throughout the book because this is more than your run-of-the-mill true crime story.  It’s also the memoir of the author’s difficult life with criminal behavior and it’s affect, genetic or not, on his family.  –  I told you it was amazing.

He takes risks with people he doesn’t know and might really be dangerous.He gets involved in online forums,  It almost seems like he actually wants to get hurt or something and then – well – it gets pretty crazy.   Did I mention that James has his own inner demons and deals with them as well as he can.

I’m not sure if it was me or if Renner messed with the chronology of both the crime and his own life.  He did it in at least one place for literary interest but there were other places where I was a bit confused.  For instance,  when did he become a professor at Uni of Akron?)  On the other hand it is a memoir and the actual owner of a story gets to do what he likes with it – see Speak Memory by V. Nabakov.)   I generally don’t like it when chronology is messed with in crime or history books as that’s part of the story,  but … as I said,  memoir is different.

Sometimes –  “Closure is for doors.”