The Templars: ~ by Dan Jones

Posted on September 26, 2018 by beckylindroos

Oh I enjoy Dan Jones (The Plantagenets andThe Wars of the Roses – links to my reviews on this site),  so when The Templars came out I immediately put it on my TBR-type Wish List at Audible.

And it was actually nominated by another member on the All-nonfiction list and it got voted to go on the schedule for October 2018.   So yes (!) I’m finally reading it.  I don’t like to read reading group selections too early. 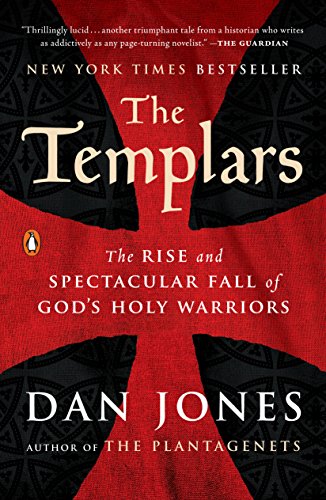 I don’t know when I first came across the Templars as an organization,  probably in high school world history.  But I became very interested in them when I read Umberto Eco’s Foucault’s Pendulum a long time ago, 1992 or so? And I’ve read some other stuff about the group in books like The Da Vinci Code by Dan Brown (an entertaining but historically awful book).

Although it’s fiction,  Umberto Eco’s version is satire and it’s for readers who think, he is an historian of medieval aesthetics.

Back to the narrative of Dan Jones.  In the Introduction he carefully delineates a bit of background on the subject, what he will cover in the book,  and his method.  This is a great example of a good introduction imo, and I rather enjoy history in chronological order although there is a case to be made for the topical or thematic organization if you want to know about specific things,  their battle tactics for instance,  or eating habits, or the economics of a group or nation.

The first Part is about the establishment of the Templars, the times, the situation in Europe and the area around today’s Israel.  This involved some philosophical issues on the parts of Popes and other powers-that-were.

And that settled the foundation that the Crusader states (of the 1st Crusade on) could be defended by religious men.   Enter Hugh of Payns, a pilgrim who instead of going back home to France joined up with a few  other like-minded souls (between 9 and 30 men), ex-patriot knights maybe, in a loose brotherhood of warrior knights who seriously decided to live a monastic life. Rather inspiring.

Part 2 concerns the military actions and alliances of the Knights Templar,  including the battles in places from Aleppo in today’s northern Syria, to Damietta which is south of Gaza at the mouth of the Nile.   And here’s Saladin and Richard the Lion Hearted.  Very clever in some cases.

Part 3 concerns the banking and property the Templars accrued.  There was a LOT and it made them both popular and the objects of envy.  More fighting of course – the appendices and maps are very helpful.

Part 4, “Heretics,”  is about those who saw the Templars as enemies  – both within and without – from  Egypt to Paris.  Pretty horrific.

5 Responses to The Templars: ~ by Dan Jones