The Coming Storm ~ by Michael Lewis

Posted on September 8, 2018 by beckylindroos

For awhile reading this I felt like I’d been tricked into buying it but that was okay because I was really enjoying it.  How did I think I was fooled? I thought I was buying a political book probably because Lewis has another book coming out (next month) called “The Fifth Risk,”  a political book,  and that’s on my wish list.  This book is a political, too,  but as it pertains to the National Weather Service, Accu-weather,  some associated groups and Trump and it’s very short,  perhaps a precursor to The Fifth Risk? 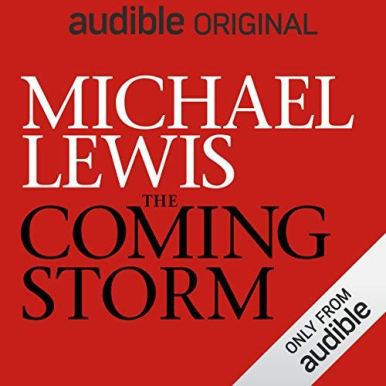 Another reason I was interested is that my late husband was a research meteorologist  for NOAA  and that’s what the Lewis’  book is about among a few other things related to data collection and use.  Actually, it’s a connecting factor in most of Lewis’ books.

Lewis is not negative about data at all,  with data we can navigate risk, see problems and make progress.  Weather prediction has become very good in the last decade or two,  there’s a cutting edge.  The US has always traded weather information with other countries and they’ve reciprocated without fanfare or hype.

Lewis goes into a few things the massive data collection of weather data can be used for.  And then he goes into the Trump administration’s pathetic staffing of its departments focusing on the Department of Commerce and National Oceanographic and Atmospheric Administration (NOAA – the Weather Service).   So with Trump,  today,  the issue is whether or not to privatize the information amassed by the National Weather Service which is paid for with tax dollars.

Barry Myers,  an attorney and the Chief Executive Officer of Accu-weather is still Trump’s unconfirmed nominee for the head of NOAA,  Myers is not a scientist at all,  but he is very rich and was a huge Trump donor,   What Myers is actually looking for is  not ways to improve NOAA,  he’s looking for ways to stop giving away their  information because his company is quite profitable.

Then Lewis goes a bit further  and looks at the distribution of wealth in the US and other more political stuff I expected – (And I’ll bet that will be in The Fifth Risk.)  With Accu-Weather the hype factor sometimes seems to become more important than the accuracy.

And think about it,  if only the people who pay private businesses for the information get tornado warnings then  or rain forecasts for their specific soil and plant growth?  This becomes about data,  statistics and probability.   Privatization may be what’s happening, but who do you trust?  It’s a coming storm.