The Folded Leaf ~ by William Maxwell

I never would have found this little gem on my own but thanks to reading groups … Published in 1945 but the book still in print (or again – ?) so therefore a classic, as opposed to being just an “old book.”   Times have changed. It’s basically a coming of age story,  one in which insecure adolescent boys of the 1920s grow into manhood experiencing a deep friendship, love, loss, guilt, etc.  Basic themes.

Fifteen-year old Spud Latham’s father suffers a career setback forcing the family,  father,  mother, older sister and Spud,  to move from their apparently large and lovely home in Wisconsin to an apartment in a town just outside of Chicago.  No one is happy about this.  In school Spud is a newcomer,  but he’s athletic so he’ll be accepted. 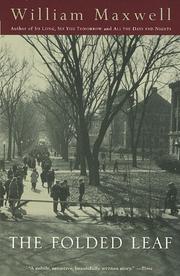 Meanwhile,  another teenage boy,  Lymie Peters has also moved into the neighborhood and attends the same high school – Lymie’s mother died not too long prior and his father is trying to raise his son alone.    Lymie is small and thin, not at all athletic,  but he’s very capable academically.

By chance in a water polo class Spud  has to save Lymie’s life –  Spud is very athletic –   but amidst the splashing, only Lymie really notices and from that point on Lymie is devoted and the two become fast friends with the smart but small and motherless Lymie becoming like a part of Spud’s family.

And the boys also meet Sally Forbes and Hope Davison who, at the end of high school,  end up at the same college with Spud and Lymie.   The boys live in the same room off campus because of finances.  They do attend a sorority dance where it is apparent that Hope’s family doesn’t have much money either.  We also discover that the athletic Spud dances quite nicely with Sally while Lymie is unfortunately clumsy.  But afterwards it’s Lymie who thinks about Sally –  his best buddy’s girl.

This is mostly Lymie’s story as he becomes aware of many things in life,  like the importance of money for social acceptance,  love.    Spud turns to wrestling and a bit of fraternity life,  while Lymie turns to academics.

I thought this was going to be an example of early gay lit  or at least seriously homo-erotic lit and I can’t dismiss the notion that it is.  Maxwell must have known what he was doing even if he didn’t come right out and say so in terms as explicit as we in the 21st century are accustomed to.

Otoh,  a main cue is on page 151 where although it appears that other boys were climbing into bed with each other in the 1920s out of natural tendencies –  I don’t think they actually kissed.

And then the thing is that consciously Lyman dreams about touching Sally and that’s who he wants to be with.