Posted on August 3, 2018 by beckylindroos

Well I was right. By the time the discussion of this book came along I’d forgot much of it and needed to read it again.  This is my own fault,  last month was so rich in good reading I was impatient with this subtle and beautifully written book.  It needs slow careful reading.

I’ve read a number of Ondaatje’s books, all 5 of them since The English Patient which I enjoyed but didn’t think it should have been chosen the Booker Prize’s  50th Anniversary winner.  Oh well –   I found them all about equally enchanting and I think Ondaatje’s book took it because of the movie.  No matter,  I’ll  definitely read whatever he comes up with next. 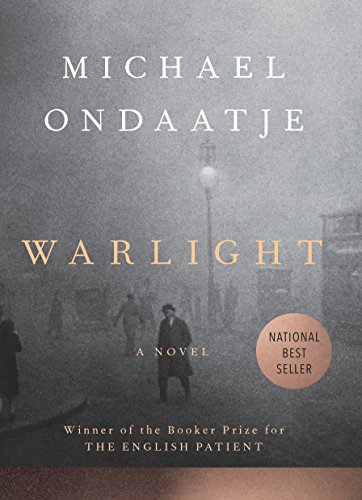 In Warlight,  we have Nathanial Williams,  our 1st person protagonist,  who is 14 years old when the story opens.  It’s 1945  in London which is barely recovering from WWII but that’s where he and his sister Rachel live with their parents until first his father leaves on a trip to Asia and then his mother leaves whereabouts unknown.  They’re given over to a “guardian”  the siblings nickname “The Moth”  and who has a strange friend “The Darter.”     Nathaniel and Rachel come to the conclusions these guys are criminals of some sort and The Darter does introduce Nathaniel to some river smuggling.

Part Two is many years later – maybe fourteen?,   and Nathanial is working at some kind of intelligence archives when he realizes that the signs around his mother’s home were removed during the war in the villages around Saints in Suffolk where he lived with his mother for awhile after she returned from her travels.    Also the people of his old life have changed.  I’d say this is a kind of metaphor for having to find your way without direction –  a tortured bildungsroman.   And although Nathaniel loves maps, that doesn’t give him one for his own life.

And he’s looking for other information in the archives where he works – like where his mother was during the war and later, after she left them.

In going back through these times the reader is treated to a section on excellent chess play,  a section on fly-tying,  another one on roof-climbing and finally greyhound racing but he does make it through what probably happened to his mother – what is believable in his mind anyway,   as well as what must have happened to other people in his life.

Nathaniel –  1st person –  struggling with his past,  the abandonment by his father and then his mother.   How he and his sister survive through the help of his mother’s mysterious and somewhat dangerous feelings friends.

Rachel –  Nathaniel’s sister – very angry with their mother – has epilepsy –

Rose –  Nathaniel’s mother –  very bright (brilliant?)  a spy of some sort,  she doesn’t seem to be very nurturing,  but in her own way …

Felon Marsh –  another ex-criminal,   friend of The Moth and helps with the children but leads Nathaniel into a life of petty crime

I suppose it was better the 2nd time but I’m not used to quite this much romance in my favorite books.