The Road to Unfreedom: ~ by Timothy Snyder

Fascinating – amazing –  book – I mean REALLY!   It’s kind of philosophically heavy but … and needs careful reading,  but it’s definitely worth it.  (I had to read many sentences and paragraphs at least twice.)   I both read and listen in order to do that very thing.  .

Snyder examines how Russia went down the path from the fall of the Soviet Union to the kleptocracy and then oligarchy under Vladimir Putin. He examines Putin’s ideas and where they came from and where they are leading. 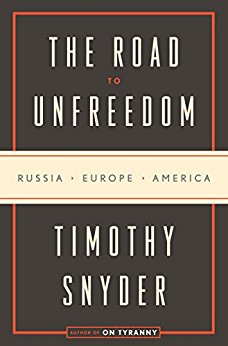 There’s quite a lot about the fascist (not Nazi) philosopher Ivan Ilyin – going back to Marxism – Stalinism – and Hegel.   This is as background for what Snyder will mean when he talks about Inevitability vs Eternity politics.

Americans and Europeans have been guided through our new century by what I will call the politics of inevitability – a sense that the future is just more of the present, that the laws of progress are known, that there are no alternatives, and therefore nothing really to be done. In the American, capitalist version of this story, nature brought the market, which brought democracy, which brought happiness. In the European version, history brought the nation, which learned from war that peace was good, and hence chose integration and prosperity.

Then there’s the attack on the individual – an underpinning of the  ideas of the West – individualism was apparently a sign of decadence to Ilyin and his followers.  The state should be the correct focal point of identity.

So what we have is the innocent Mother Russia in her pure form as a Christian Eurasian Empire,  while the world,  especially homosexual alliance,  the Economic Union and other obvious signs,  are opposed to it – oppressing it – over and over – eternally.

Much of the narrative deals with the background of Putin and the Russians – their tendency toward autocracy and what happened after the Soviet Union collapsed.   There were no  institutions to click in and the assets of the whole country were essentially sold to the oligarchs.   Putin came out on top.

The Russians have been ruled by authoritarian regimes for almost all of their history and in recent years have flirted with fascism of various kinds.  Since 2010 they have broken with any idea of joining the EU working instead toward forming their own empire of alliances as Eurasia.  Snyder says that Russia (Putin) wants to destroy the EU.

Gender politics is important here –  homosexuality has been demonized and there are huge factions in both Russia and France  (Marine Le Pen) which see things that way –  as does Donald Trump.  Trump’s associations with the Russians is outlined in brief – the Miss Universe pageant to the Trump Tower meeting in June 2016  and the elections.

In Putin’s thinking (according to Snyder) “factuality” is not a concern.   There is no “objective” history or news –  therefore,  here’s our made-up version –  and we’re honest because we’re admitting it.   Trust us. –  LOL!

What happened in the past makes today possible – probable –  not inevitable but if not,  something new will have to happen –   Ukraine.

The hardest chapter,  boring in some ways,  is Chapter 5,  “Truth or  Lies,”  details  the ongoing Ukrainian war with all it’s violence,  lies and propaganda and aggression and so on – the extent and the effects of the propaganda –  right down to Brexit and Paul Manafort (Trump – with his “alternate facts and daily lies).   It’s all about undermining factuality.

But Chapter 6 makes it worth getting through Chapter 5 because Chapter 6 brings us right up to today –  how the US was kind of primed and ready (for a multitude of reasons both liberal and conservative)  for something like what has happened  –  that  we have a Russian puppet as president.  The book ends with blame on Russia,  Trump and the US for being so ready for something like this in so many ways.

There is a short Epilogue of positive comments but …  overall,  the boo presents a scary and depressing scenario.