A Month in the Country ~ by J.L Carr

The Cafe de Letterati  chose this book as it’s July 15th read-  I’ve read it before but it’s been a long time and I remember liking it quite a lot.  Published in 1980 –  I think I read it in the mid 1990s –  so it’s not exactly top of the best sellers now – well worth the reread though.

I had to hunt the book down in my personal library –  I wasn’t going to buy a new copy in Kindle format if I already had it (although I’ve done that with other books).   The condition was great on the outside but inside it was marked up with all the marginalia typical of my reading since the 1990s (except earlier,  in college,  where I did quite a lot).
Yes,  it was hard to read because my eyes don’t do print font very well – 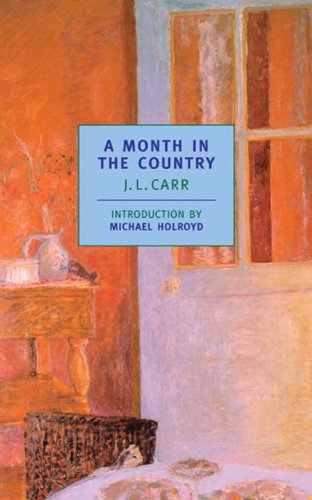 Tom Birkin is an unemployed English WWI veteran and takes a job restoring an old painting in a village church.  There he meets a guy named Moon and the preacher and his wife the older Reverend Keach and his young and beautiful wife,  Alice as well as  a few other villagers. He makes his home in the belfry.

Moon is digging a hole to find the grave of someone – possibly from long ago.  Both the paining restoration and the grave finding have been commissioned by virtue of a will left by a now deceased parishioner.

The narrator,  Birkin,  is remembering this from about 60 years later (1980?).   It was a good summer,  following WWI and most of the characters are healing from something.  The thing is they are all a bit hidden – like the painting,  like what’s in the hole,  is it a grave? and why did Alice marry the minister?  .

The countryside is beautifully described but the writing is a bit old fashioned.  There is a lot of humor here too, and it fits nicely.  It’s a curious book.

1 Response to A Month in the Country ~ by J.L Carr