There There ~ by Tommy Orange

This book by Tommy Orange had been catching my eye recently – very recently as  it was only released this month (6/2018).   I just had some space and picked it up and read it – well … downloaded it and read it.  Native American Lit fascinates me – from Louise Erdrich to Sherman Alexie and many others,  Leslie Silko but also Aboriginal or First Nation lit from Australia, New Zealand, Canada, and elsewhere – places in Central and South America.

The story is a tale of Native Americans in urban America, Oakland to be exact,  and as it’s very 21st Century, it’s not a nostalgia piece.  It’s about life for natives in the big anonymous, drug and violence infested big city –  lives of loss and grief and the desire or need to escape. And it’s a search for identity in many cases – in search of what it means to be Indian. 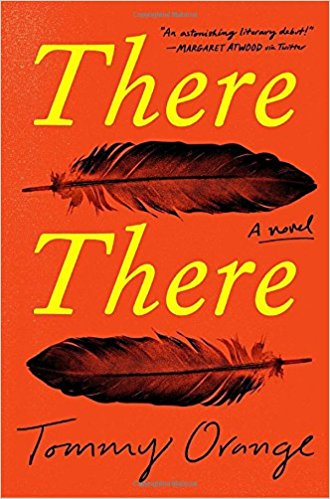 A pow-wow is being planned to take place in Oakland,  California current day.  A whole number of people are looking forward to it and either planning the event itself or planning to attend. Some live quite near,  others are coming from a distance.  Some know each other,  some don’t.   They are very different from each other in some ways,  but very much alike in others.

“Jacquie Red Feather is newly sober and trying to make it back to the family she left behind in shame. Dene Oxendene is pulling his life back together after his uncle’s death and has come to work at the powwow to honor his uncle’s memory. Opal Viola Victoria Bear Shield has come to watch her nephew Orvil, who has taught himself traditional Indian dance through YouTube videos and will to perform in public for the very first time.

And there are the others, 12 wonderfully drawn and detailed characters who populate this book,  an amazing debut novel.

There is so much pain involved, with touches of joy and a lot of love and grief thrown in.   What’s past may be prologue – or maybe not.   Highly recommended!

3 Responses to There There ~ by Tommy Orange