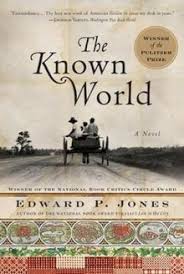 First off,  this is NOT an easy book and I really wasn’t in the mood or something so it took me awhile to get into it.  (But then I did,  big time.)

Besides that,  the Audible reader was rather dry by comparison to the newer readers so that added nothing.   That said,  The Known World is a very, very good book – an amazing book – and worthy of the Pulitzer in every way.  By the time I was about 1/2 way through or a bit less,   I was totally hooked.

As a lover of historical fiction,  I was very interested in Jones’ research so I googled that –   and found out that although Jones knew some stuff (like there were some free blacks who owned slaves in Virginia),  but other than general info – the story is totally imagined – even where it seems like it must be a fact somewhere.  Because the Jones’ style here is to be as detailed as possible (more later).

In a fictional county in antebellum era Virginia the narrative opens with the death of Henry Townsend, the black owner of a small plantation and 33 slaves.   Long ago Henry had been a smart, brave, lucky and determined young slave who,  after his previously freed parents purchased his freedom,  bought his own slave and under the tutelage of his former master,  learned how to run a plantation.   His  intent was to be a “good shepherd” and conduct his relationships with everyone as God would have him do it –  he would “tend to his flock,”  so to speak.  There are a lot of Biblical  references and allusions in the book used in every sort of way.

Henry then went on to buy land and more slaves,  to learn the ways of masters and to teach his own slaves how to treat act and how to him.  He married a lovely woman who also believed that slaves should be treated with as much humanity as possible.  Still,  the slaves were not unhappy when their master died and  that’s telling.  Henry tried to be the “good master,”  but failed because …  and that’s the main theme of the book –  slavery was so pervasive and oppressive that everyone was perversely affected – even the abolitionists.

I have to add that the idea of buying,  owning and selling human beings is far more important here than the idea of race or the actual work and lifestyles of the slaves.  And I think it’s the far-reaching tentacles of the stigma of flesh-peddling which penetrates even into today’s difficulties dealing with race relations in the US.

The buying, selling and owning of human beings gets grim and Jones does not skimp on the details.  At the same time there is never a hint of moralizing or bias –  that’s simply because the actions speak very powerfully for themselves – any bias at all would be an over-statement.

There are many characters and the chapters focus on the history of several of them via intertwined back- and future- stories,  the point being that the social situation is very, very complicated with slavery putting a particular onus on everyone,  whites, blacks, Cherokees, mixed race,  slaves (current or past), relatives or outsiders, lawmen, outlaws,  abolitionists and those who upheld the institution.   No character is completely good or completely bad –

Interesting to note that even the minor characters are fully fleshed out with backgrounds and futures included.  Jones’ characters and events  are ALL drawn with as much detail and as realistically as possible which adds to the feeling he must have done an enormous amount of research.  Jones created a world this reader totally bought into and the ideas transferred to the historical reality of the  world.

2 Responses to The Known World ~ by Edward J. Jones