An afterthought on the Pinker and Gordon books:

(all links to my reviews)

I finished the Robert J. Gordon book,  The Rise and Fall of American Growth:  (2015) and it is superb.  Yes!    And I reread quite a lot of Steven Pinker’s Enlightenment Now:   and again,  excellent – for what it is.   And I just have to write up the comparison because they certainly are different.

In a somewhat ironic note,   Pinker refers to the Gordon book in Enlightenment Now and Gordon refers to Pinker’s 2011 work,  The Better Angels of Our Natures  in his 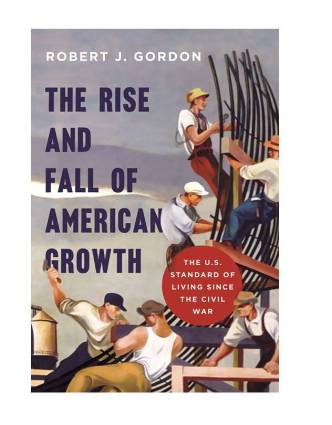 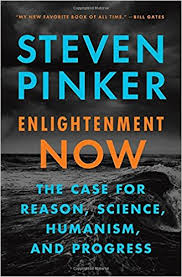 book.   And the reason they refer to each other is that they both look at the past in order to understand today and how we got here  – also,  possibly, in the case of Gordon to predict and suggest, or with Pinker, to show cause for outright optimism.
But where Pinker tries to convince his readers not to give up hope,  Gordon is a realist and harbors no illusions.  but isn’t predicting a crash or anything – just “more of the same”  as has been for 40+ years, for the US and from here on out – the good old boom times are NOT coming back.   (This is pretty much straight economics,  not psychology or philosophy.)

Gordon has some policy proposals at the tail end of his work while Pinker barely admits there are problems.   Bill Gates loves the Pinker book,  but only the first 80% of Gordon’s.   LOL!  Pinker and Gates take a world view that life as we know it is improving.   Meanwhile,  Gordon’s book is concerned with the US only –  and it is an economics book by an important economist.

Gordon looks at both today and the last 150 years with eyes open.  His conclusion is that 1870 – 1970 was a time of exceptional progress in the US for several reasons:  1.  the actual inventions and immigration of the late 19th century;  2. the innovations of the early 20th century;  3. WWII boom;  and 4. the Baby Boomer generation with more and better education,  equality,  and opportunity available than ever prior.  This is all backed up in many ways and with some serious stats.

I’m not recommending this here because it’s really long and kind of boring if you’re not interested because all that detail gets a bit tedious.  Plus he kind of goes on and on and then reviews – heh.   But if there are some things you’d like to check out I’d say go get the book from the library and take a peek especially at Part 3 – where he gets into the issues facing the economy today.  –  His policy proposals include immigration (yes!),  education (yes!),  incarceration rate (yes!),  drug legalization (yes to his ideas),  minimum wage changes (yes!),   changes to the tax structure (yes!), changes to the regulations on business (yes! – to his ideas),  using gas instead of oil due to carbon emissions (yes but I’d like more solar and wind!).    And even if all his proposals were somehow put into action it would still not bring about the conditions which resulted in the boom years of 1870-1970.  Those days are gone.  This is the new normal.

Back to Pinker:  I still like him and his book because without some kind of hope that we can improve things  (like with Gordon’s policy ideas) then who cares?  Just abandon all hope?  –  No – because we need hope in the form of Enlightenment Now:  Reason, Science, Humanism and Progress to just deal with the issues we have even if the results are not as splendid as we would like.  (And climate change is a whole ‘nother issue along with capitalism –  see This Changes Everything: Capitalism vs the Climate  by Naomi Klein and Capital in the 21st Century by Thomas Piketty. (my reviews)

And re Pinker,  I hope my happiness quotient isn’t completely dependent on my standard of living (given a reasonable bottom $$ level) and more on my quality of life – which has to do with so many things outside of the almighty dollar.