The House of Government: ~ by Yuri Slezkine

Posted on April 5, 2018 by beckylindroos

Heck of a book to pick up right after finishing How To Read the Bible!   But this book just fascinated me from the first mention I heard of it,  and then someone on the All-nonfiction List  mentioned it in a post – so I started doing a bit of research.   I listened to a an Audible sample,  I read a chunk of the Kindle sample and I read some reviews.  Okay – “Uncle!  I give up!”  –  I followed my heart and I got it – both – Kindle and Audible copies.

Actually,  I expected this to be another long and difficult read like How To Read the Bible,  but NO!  Although it is long,  This book is actually page-turning and hour-devouring.  Slezkine writes wonderfully well and Stefan Rudniki reads it beautifully –  having both the print (Kindle) and Audible versions was perfect. 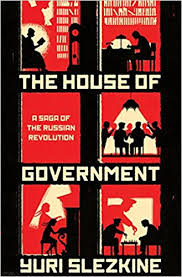 I think I read somewhere,  something to the effect that The House of Government is the nonfiction War and Peace of the Bolshevik Revolution with some Gulag Archipelago (Solzhenitsyn)  woven in.    And yes –  I think it is that.  And I love War and Peace as well as In the First Circle (also (Solzhenitsyn) and I  enjoy reading about Russian history,   so … yes –  I’m a kind of model lay-reader for it.

It’s an amazing book –  wonderfully well researched  and organized,  in addition to being beautifully,  even powerfully,  written.  There is a lot of excitement in the narrative as the Bolshevik revolutionaries coalesce to take hold of the government,  wait,  grab it,  and then proceed to remake society according to their plans which were inspired by Marx,  initiated by Lenin and driven by Stalin.   And then it all seemed to end in World War II.  –  The problem,  Slezkine,  is that,  unlike Christianity,  the Bolsheviks never developed a way of transmitting their faith to the children – it never reached the 2nd or 3rd generations.  –  This is a very important theme – what happened?

There are three major “Books” with three “Parts” in each book and a number of Chapters in each “Part.”  The organization is clear.

In Book 1, “En Route,”  Slyzkine discusses the Revolution itself,  from the many participants in the take-over and Civil War to the death of Lenin in 1923 and on into Stalin’s early years.  This is after the failure of the New Economic Policy and when the Bolsheviks have gone into some kind of “postclimactic melancholy”  as well as re-education of the general population – the “non-Bolsheviks.”   Slezkine examines and analyzes the literature of the period.

The narrative wanders through many,  many names and their contributions –  it’s like a family saga – as mentioned in the subtitle.  These folks knew each other,  studied together,  lived together,  married, divorced and remarried each other (or lived together). They  had children together, worked together and vacationed together just like any elite group –  which is a part of Slyzkine’s point.

“Book 2,  “At Home”  focuses more on the actual “House of Government”  or the “House on the Embankment.”    including who designed and built it,  what it was like to look at and live in,  and other issues.  There were problems living under the dictatorship of Stalinist Communism during the first 5-Year Plan –  when almost everyone was really working to transform the country but there  there was also a huge amount of enthusiasm, imagination and work on experimental plans among the elites – the residents of the Government House.

Much of Book 2 deals with the children of the House of Government – as would seem appropriate because one of Slezkine’s major themes is that the Old Bolsheviks had not prepared their children  –  they didn’t know how – so they fell back on their old bourgeois childhoods,  literature,  entertainments and so on.

My favorite subject  (person, character)  in the whole book is Lyova Fedotov, “… the son of the Russian peasant, American worker, Trenton Prison inmate,  Central Asian collectivizer, proletarian writer, and machine-tractor-station political chairman,  Fedor Fedotov.” (p 676)  He is such a geek – intellectual from birth.

At the end of Book 2 a guy named Sergey Kirov is killed and finding the perpetrator(s) of the 1934 assassination was a kind of starting point for the death of the Bolsheviks because it snowballed into a true witch-hunt and purge.  Slezkine makes that  point pretty clearly.  And it gets very sad with much detail regarding several families.

And Book 3, “The Trial,”  deals with the actual purge of the Old Bolsheviks, and others and the death of the “faith” in the millenarianism of Bolshevism.   Slezkine goes into a bit of history re other “witch hunts” and spends a bit too much time on the child abuse cases in Southern California but it’s important so that contemporary readers can get the idea of what went on at the “trials” of the Russian “traitors.”   The book is heartbreaking at times.

It reads,  and Rudniki performs it,  as though every single sentence is vital. I needed the Kindle version to really comprehend and follow listening for awhile,  then finding my place in the Kindle and reading forward,  then going back to the Audio to listen until I caught up and went ahead again.  (I love doing this – it happens only when a book is fairly complex or dense.)   Also,  there are photographs in the Kindle – of people and places – especially The Government House (“House on the Embankment”)  both inside and out,  under construction,  lived in,  and empty.

For me,  though,  I think it’s the scope and the details which make it stand out –  not to neglect the overarching theme of how the Bolshevik Revolution came to be,  grew, took over the state, held on and died as more of a failed religious, millenarian, apocalyptic prophesy or revolution –  a vision and disillusionment- than a lasting movement.  (“As of this writing,  all millenarian prophecies have failed.”  – pg. 272)  Plus,  it’s got all the juicy tidbits.

Slezkine uses a lot of primary source materials including letters, diaries, newspaper articles and whatever else he found.  Sometimes long excerpts from these documents are quoted.