How to Read the Bible: ~ by James L. Kugel

Although I generally enjoy reading about the history of the New Testament and Christianity – as shown in this blog –   I’m also very curious about  Old Testament history and interpretation.  I just haven’t come across as many books readily available to the public regarding the Old Testament as the New,  but I did come across this one some time ago and it looked quite interesting.   And it is – fascinatingly so.   It’s taken me months to finish because it’s dense and informative but at the same time it’s well-written and enjoyable.

How  to Read the Bible is basically about the history of scholarship and interpretation regarding what we know as the  Old Testament (Jewish and Christian scholarship).   It was published in 2007 so it’s up to date,  and it’s pretty good,  easy to follow, illuminating.    Kugel identifies as an Orthodox Jew,  but his teachings are not orthodox at all –  more of a heretic or at least a skeptic –  what he does is separate his scholarly work from his personal spiritual life and he honors the whole. 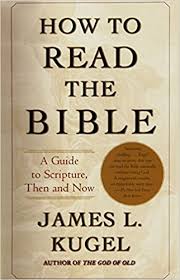 There are a lot of seeming inconsistencies and difficulties (impossibility in a few cases)  in trying to take the Bible at face and literal value.  In fact,  Kugel says (quoting others) that’s not even the way the ancients interpreted it.   Jewish scholars from early on had other things to say about the various possible meanings,  some writers added to the originals,  some removed little sections,  some edited the way they saw fit. Christians did the same thing until the Bible was formally canonized.    So starting from a string of Four Assumptions that people have about the Bible and how to read it,  Kugel works his way through it.

Those Four Assumptions are:

1. The Bible is cryptic – there’s a need for some good interpretation.

2.  The Bible is a book of lessons directed at readers of their own day.

3. The Bible has no contradictions or mistakes.

4. The entire Bible is a divinely given text,  a book in which God speaks directly or through his prophets.

In all his studies – he doesn’t see those Four Assumptions working out very well.  He does try to make as much  literal sense of the Bible as he can but sometimes that’s just not thre for a number of reasons.   So he goes by the interpretations of ancient, historical and contemporary scholars – all.  It’s quite interesting.

In Chapter 1  Kugel outlines the history of Bible interpretation itself and then gets down to cases in the following chapters progressing by Biblical order.    In that first part he includes the assumptions of the old interpreters,  the scholars and rabbis and church hierarchy understanding that they were followed or accompanied by the heretics and then the printing press.   Soon everyone seemed to have their own interpretation.

It’s very nicely written although occasionally it gets a bit dry.   The work of a lifetime, I’m sure,  although he has published many other books and even two since this one came out.   I have to tell you-  I’m looking forward to reading them.

1 Response to How to Read the Bible: ~ by James L. Kugel