The Third Victim ~ by Phillip Margolin

I just needed something different in the middle of Steven Pinker’s Enlightenment Now because that book can get really tedious.   So I picked up The Third Victim by Phillip Magolin,  his new one.  I’d never read anything by him before but it sounded interesting.      Yup –  it was just what I needed even if it does have quite a lot of graphic violence against women, 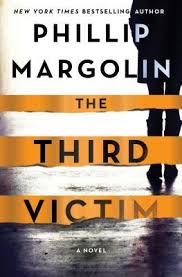 PLOT:   A young woman stumbles out of the forest near Portland Oregon..  She tells the police officer who finds her that she has been violently abused and says she has escaped from kidnapper who held her captive.  She’s in bad shape.

Two other women,  both prostitutes,  were recently murdered in a similar manner – abuse to the point of torture.

A prominent attorney is arrested for the murders and the torture of the last woman whose testimony is obviously  vital.   And what the attorney’s current wife has to say about him and his activities is telling.  And of course there’s his own version of events – he denies it all and blames his wife.   He hires Regina Barrister – the best defense attorney in the city,  perhaps in the state.

Meanwhile,  a pimp has been murdered by a cop – or is that really the way it went down?  Whatever … Officer Praeter was arrested also hired Regina Barrister as his attorney.

But there’s Robin Lockwood,  the young, vital,  hard-working and idealistic attorney who is assisting Regina.  She gets  concerned about some similarities in the two cases.   The story is told from several points of view including those of Robin and Regina.

This book is a good twisty yarn and it even has an excellent and original aspect to the main story.   Besides, although this is billed as a legal thriller (my favorite if they’re good)  it’s also a pretty decent procedural.   Therese Plummer does an excellent job of narrating.