Posted on March 6, 2018 by beckylindroos

As the discussion on this book started at the All-Nonfiction Group  I realized I hadn’t really paid enough attention to remember accurately,  so I decided to read/listen to it again focusing on the reading.    I knew there were several families involved and I remembered some names,  but not any details.  (I finished the first time back in mid-February – not that long ago).

This time  I notice Desmond calls himself an “ethnographer,” a person who systematically studies people and cultures. 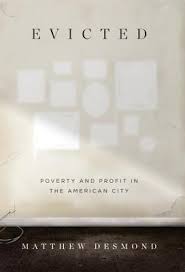 One reason I may have had a problem the first time is that I was probably looking at it from a policy analysis point of view.   That was something I studied in grad school as a candidate for a Masters Degree in Public Administration (a long time ago though).

The book opens with Arleen  who has 2 young boys   who is evicted for non-payment and trouble with her boys in a snowball fight and a kicked in door.

Sherrena and her husband Quentin own and manage the apartments where Arleen lives.   A lot of the book is how Arleen got there.

Lamar is dishonorably discharged vet with no legs due to gun violence after he got out.  He lives with his two teenage sons but other boys show up.   He’s waiting back pay on SSI and behind in rent.  He’s probably a great tenant.   Hard to find jobs.  He works at the apartment house to pay  some of his back rent –  (This guy was probably my favorite of the bunch.)

An unnamed tenant who called a renter-assistance program (DNS) and got Sherrena in trouble so she got evicted the tenant for back-payment.

Lenny Lawson manages a trailer park for Tobin Charney – Susie works in the office and also lives there a bit cheap.  Charney is often in trouble with the Milwaukee Council.

Larraine,  who is intellectually challenged and lives alone,  gets an eviction notice from Tobin as does Pam who lives with her boyfriend Ned and their two young daughters.  Neither one can come up with Tobin’s rent.   Both Pam and Ned have drug abuse and sales histories – felonies.  Pam and Ned work for their welfare checks but they also need transportation – and “A lot of money went to dope.”    –  street to where …

Back to Sherrena’s apartments Trisha, illiterate from an abusive home,  moved in upstairs from Arleen.

A large family called Hinkston lives in the duplex in front of  Lamar.  Doreen,  the mother,  took her eldest daughter Patrice and family in after they got evicted. Doreen’s place was trashed and electricity pirated – Doreen’s was not in good shape.

There are other people who come into play – Crystal,  Doreen and Vanetta,  for instance.

The book was still depressing and long.  The author says he was depressed for years after writing it.  No wonder.

Wisconsin is a difficult state to reform – they want to cut back on all aid and all state assistance and state jobs –  all of it.

But I’m not a “bleeding heart” liberal –  the resources of the US are great but they are  NOT unlimited.  The fact that more money is spent by the government on the housing costs/needs of middle class and up thanks to tax deductions of way more people proves nothing.  I don’t think that having a secure apartment or house alone provides a stable home life (which I agree is necessary for the healthy development of children).   These people are not functioning on many levels –

If the housing voucher program were expanded to include all those who qualify monetarily what would happen to the people who don’t keep their places up?  Whose neighbors complain about them big time?  The mothers whose men are gang members, felons,  domestic abuse perpetrators,   or are severely depressed and/or addicts themselves?   Where do they go?   Or do they just stay in their homes and the neighbors and landlords be damned?

This does NOT mean I’m against expanding the voucher system –  not at all!  It really does need to be expanded.   It means certain problems will have to be addressed in order for it to work the way we want it to – efficiently,  effectively and e