Posted on February 15, 2018 by beckylindroos

I read this for the 4-Mystery Addicts reading group and it’s a book I would never have picked up on my own,  but it was pretty good.   Fwiw,  I’m getting kind of tired of reading about women in trouble though –  about their lives of hardship and pain and so on.  They always seem to be victims of something –  even the “strong” women due it against sexist adversity.

Although Thompson is usually considered to be a writer of “cozy”  mysteries,  this one gets quite gritty and sordid  in subject matter.   With “cozies”  crimes don’t  actually happen in the narrative.  They virtually always in the past or off-stage,  so to speak,  with the story line following the efforts of the detectives after the fact.  Another thing is there’s also an amateur detective as well as a police presence somewhere.   Murder on Astor Place fits. 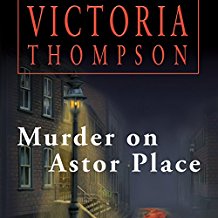 We’re in  New York circa 1895-96 and the papers are full of Teddy Roosevelt as Police Commissioner.  This was the height of the Gilded Age which,  although I’ve read better descriptions of it and some novelists work it into the story better,  Thompson uses it quite well and it’s front and center to the main plot –  probably the plots of all the novels in the series.
https://en.wikibooks.org/wiki/History_of_New_York_State/Gilded_Age_New_York_State

This is the first in a series so I expected some good character development for the lead detectives in order to set up an over-arching plot.  There is that –  Sarah Brandt, our amateur detective is a midwife by trade, but that’s illegal in the city at the time so she’s not exactly a fan of the police.  Sarah is

“Petit Chateau” Vanderbilt Mansion at 660 Fifth Avenue. It was built in 1882 and served as an influential example for other Gilded Age mansions, while also demonstrating the visual outpouring of wealth.

the widow of a murder victim and estranged from her prominent family.

One night while delivering a baby,  she discovers the body of a 16-year old girl.  This turns out to be the sister of a past friend.  The girl  had been strangled.  Sarah  starts doing a bit of investigation of her own.

This activity brings her into contact with Police Detective Frank Malloy who is a  good at his job.  He fears for Sarah’s safety and rather resents her interference.

It turns out Alicia VanDamm, the deceased,  was the daughter of very prominent couple,  Cornelius and Felicia VanDamm –  and Alicia was pregnant.  And then it turns out the Russian midwife is also dead.  The tale goes on.  There are a few family members and servants and gossipy society ladies to investigate and interview.  Also,  there’s an underlying hint of a possible romance between Sarah and Frank.

The historical part is light although Thompson certainly did some research – sometimes it shows,  sometimes not.  The New York police department of the era was notably corrupt  and Roosevelt took some measures although he and his faction tooted his own more than was probably deserved.    Thompson has an extensive oeuvre with romance and mystery series going back to 1985.

Bottom line –  I did enjoy the lead characters of Sarah and Frank,  the mystery was good enough with a few twists,  the history was light but accurate – and sometimes  new –  for instance Astor Place is a real street,  very short,  located in Lower Manhattan.   I’d like to find time to read Book 2,  Murder on St. Mark’s Place,  but …  we’ll see.

4 Responses to Murder on Astor Place ~ by Victoria Thompson