Posted on February 12, 2018 by beckylindroos

I’m as much a fan of Pride and Prejudice (Jane Austen – 1813)  as most moderately well-read folks,  probably –   it’s a great book,  funny and very insightful as well as being nicely-written and it’s definitely stood the test of time.  Furthermore it’s like a bird’s eye view of the times – to a limited extent.

What we have here in Jo Baker’s Longbourn is a take-off or a spin on Austen’s story and I likely never would have read it on my own but this was a group selection. Yes,  gentle reader,  I did enjoy it. 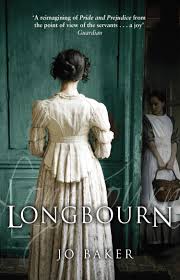 For those who don’t know or remember –  Longbourn is the multi-famiiy estate where the Bennetts of Pride and Prejudice,  live but which will be given over on the death of Mr Bennett  to a cousin,  a clergyman named Mr Collins.  Such were the laws of inheritance by “entailment.”

So the good Mr and Mrs Bennett are mainly concerned with finding “eligible” (rich) husbands for their five daughters ages 16 to 21.   But when an eligible  bachelor moves in nearby and brings a friend who is even more eligible,  the situation becomes interesting.   There are several men available, but their either not quite satisfactory in terms of of appearances and getting the girls “properly” provided for – and of concern to the young women it’s for love as well.     That’s the take-off point of Pride and Prejudice.

Meanwhile,  the stories which are NOT told in Austen’s book are those of the servants.  As the Bennett story getting marriages going unfolds “upstairs,”  the “downstairs” crew is having it’s own problems because just as  there’s a new man or two for the Bennett girls,  there’s also a new man-servant  added to the staff to help with household duties – a rather mysterious man named … um … James Smith.

Sarah,  our young protagonist,  is a maid in the Barrett household, working out fairly well under Mrs Hill,  but thinking about the new man as the situations in the Bennett family develop,   If Collins gets Longbourn, how will it be to work under a new owner?   And who are these rich young men,  Charles Bingley,  Fitzwilliam Darcy and George Wickham?

Meanwhile,  the military plays a huge part in Baker’s book (there was a war going on!) and several 21st century concerns are addressed,  racism,  sex and sexuality, the idea of servitude,  etc.  These things are not even touched in the Austen book.

Rather than look up any other Austen re-creations or sequels or what have you (Zombie books) I’ll likely try another one of Baker’s.

1 Response to Longbourn ~ by Jo Baker